Pools in Ridgecrest were emptied by the shaking, as were stores and restaurants 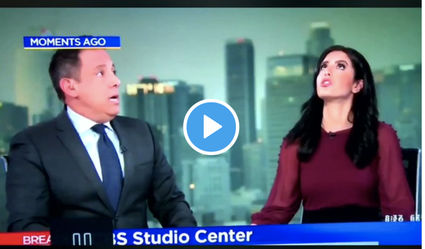 In the CBS Studios in Burbank, newscasters clutched each others hands and looked in fear at the ceiling during the earthquake

At 8:19 PM on July 5, 2019 a 7.1 magnitude earthquake hit the same area, 17 km south west of Ridgecrest California. Given that it's magnitude was greater than the initial shake, this qualifies as the main shark and makes the July 4 earthquake a pre-shock.

An event at Burbank high school was evacuated due to the quake.

At Caltech, Dr Lucy Jones said she could not remember a series of 3 earthquakes each greater than the one before but it is possible. Later, Caltech said the probability of a larger Southern California earthquake in the days ahead, was 1 in ten.

The game at Dodger Stadium was interrupted briefly for the event.

Ridgecrest, the town of 27,000 not far from the epicenter (17 km, or about 11 miles), did experience more damage and fires from the earthquake. Authorities did not expect to complete damage reports until the next morning, when they had a chance to inspect buildings. But there were about a dozen fires reported.

In Trona, a town on the edge of the dry Searles lake bed, people ran into the streets crying and reassuring each other.