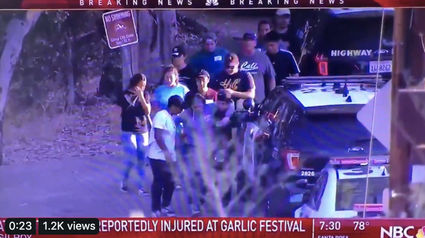 Three people were killed in a shooting in Gilroy's Christmas Hill Park late Sunday afternoon, 7/28. Police say the dead include a 6 year old boy, a 13 year old girl, and a young man in his 20's. The 19 year old shooter, Santino William Legan, was also killed. 12 people were wounded, a local hospital spokeswoman said.

Remarkably, the shooting at the annual food festival lasted only about a minute before police responded. Legan was shot and killed about 90 seconds after the shooting began. His motive remains unknown.

Eyewitnesses said there were two shooters at he scene, but authorities appear to have discarded this assertion. At shootings, often witnesses incorrectly report two shooters, because they hear the echoes of the rifle report.

One witness, Julissa Contreras, told the NBC TV station that she saw a white man in his early to mid-30s firing a rifle that was "able to shoot three to four shots a second." #Gilroy #shooting #California #garlicfest19 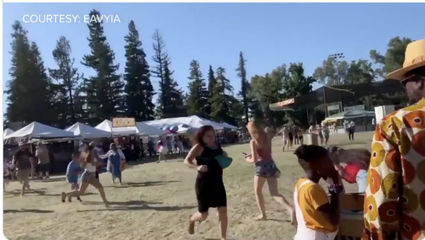 Gilroy Garlic Festival Shooting Sources tell me at least a dozen people have been injured, and "probably not more than 40". The source adds, "There are dead. Count not coming in just yet as they are still on an active shooter op." Guy in cammo jumping fences, according to source. #ABC7now

The Gilroy Police Dept (@gilroypd) tweeted: The hearts of Gilroy PD and entire community go out to the victims of today's shooting at the Garlic Festival. The scene is still active. If you are looking for a loved one, please go to the reunification center at Gavilan College at parking lot B. #GilroyActiveshooter

The Gilroy Garlic Festival is one of the largest food festivals in the United States, held annually in Gilroy, on the last full weekend in July at Christmas Hill Park. The 41st Garlic Festival was held on July 26-28, 2019. Several concerts and cooking competitions will take place during the weekend.

Over 4,000 volunteers from more than 150 non-profit groups make the festival possible, and over three million people have reportedly come to the festival since it began.

Witness line and family reunification line: 408-846-0583. If you saw something today please call that number immediately. Please keep the main GPD line for emergencies only. Media please do not call that line. A media line will be posted soon."