Lenny's Deli on Westwood Blvd Closes Due to a Combination of Bugs, Rent and Delivery Apps

West LA eatery had formerly been known as Junior's Deli 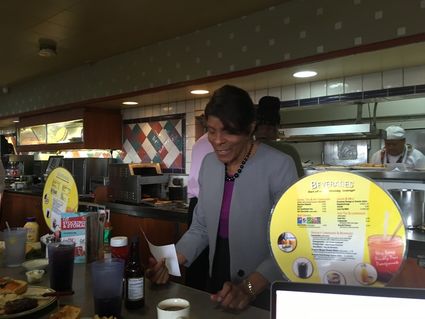 Manning the counter at Lenny's Delicatessen, where celebrities mixed with corn beef and rye bread.

Even a fifty year old restaurant is not safe in the era of food delivery apps. Or maybe it was the cockroaches that did Lenny's in.

Lenny's Deli has announced that they will not be opening their double doors again.

This is sad news for those of us of a certain age, who remember going to Junior's Delicatessen as kids, with our parents and grandparents. The West LA eatery, formerly known as Junior's Deli, had been closed by the LA County Health Dept due to a cockroach infestation on June 28th.

A sign posted in the window July 27 reads: "Attention all Lenny's Customers: Unfortunately we are officially closed for business. We thank you for all your loyalty, and wish you all the best". The phone number has been disconnected. 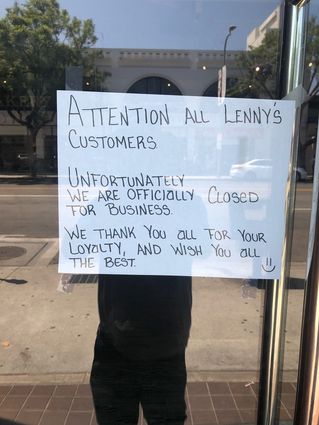 "Attention all Lenny's Customers: Unfortunately we are officially closed for business. We thank you for all your loyalty, and wish you all the best"

For those who are uninitiated with European style deli food; at Lenny's Delicatessen, celebrities rubbed shoulders with waiters and waitresses, carrying plates of kreplach soup, Lox and Eggs and Onions and corn beef sandwiches on rye bread. Admittedly, there is little healthy about a Pastrami sandwich with a potato pancake and sour cream. But it was good for the soul nonetheless.

Lenny's charged a little extra (about $25-40 per person with tax and tip). But you were paying for the pricey real estate, to sit and watch the world go by for a while. In doing so, you were subtly comforted by the thought that some things, like schmaltz, grandmothers and deli food, did not change.

RIP Lenny's. This really is like losing an old friend.