Icons of Hollywood Art Show & Sale at the Edwards-Lowell Gallery

What do Kelly Risk and Jim Evans T.A.Z. have in common? Breakthrough artists appeared in BH 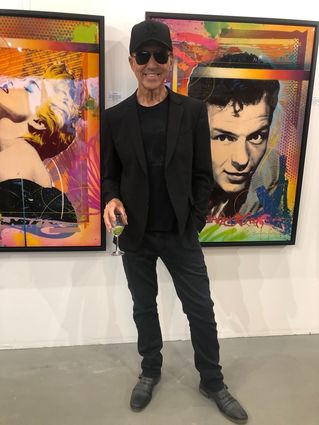 Artist with his work at the Edwards Lowell Gallery

These colorful one of kind art pieces range from $1000-50,000 and are both framed and unframed, either on canvas or paper.

These paintings capture the essence and personality of each celebrity, surrounded by electric colors of blue, green red, and framed in either black or white.

Artist Kelly" Risk's" pop art "Neon Tongue" and "Hello Kitty" were exciting and so cute! This art show was well attended by established people in the entertainment industry. I was introduced to a lovely young singer "Seyed Sabrina" with new CD "Thou Art That" 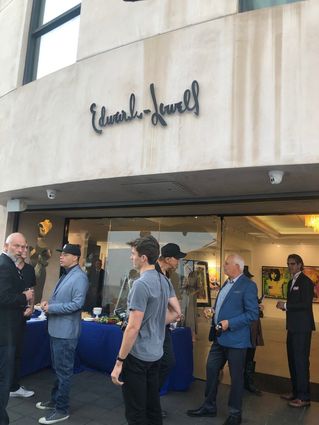 RISK (born Kelly Graval), also known as RISKY, is a Los Angeles-based graffiti artist and fashion entrepreneur. In the 1980s, RISK gained notoriety for his unique style and pushed the limits of graffiti: He was one of the first writers in Southern California to paint freight trains, and he pioneered writing on "heavens", or freeway overpasses. At the peak of his career he took graffiti from the streets and into the gallery with the launch of the Third Rail series of art shows, and later parlayed the name into a line of graffiti-inspired clothing. https://en.wikipedia.org/wiki/RISK_(graffiti_artist)

Jim Evans, sometimes known as T.A.Z., is an American painter, printmaker, and creative director who was a contributing figure in the visual art movement known as underground comics. After a successful career as a comic illustrator, Evans worked as a painter, poster maker, and owner of the digital design group Division 13. https://en.wikipedia.org/wiki/Jim_Evans_(artist)