Suspect Narrowly avoided being shot but didn't avoid the SMPD 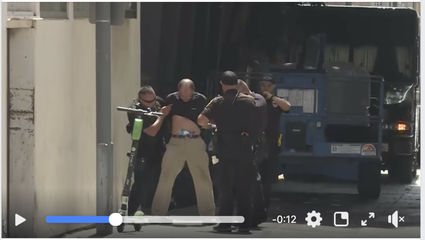 Police search a Brinks security guard after he fired two shots at a man who robbed his armored car brandishing a knife.

Santa Monica Police were seen in a CBS News Video frisking and taking into custody a bald, middle aged Brinks security Guard. His gun was visible in his belt, underneath his shirt. He had fired two shots at a fleeing suspect near the crowded Third Street Promenade, causing bystanders to panic and flee what some though was a mass shooting incident.

Police also took the robbery suspect into custody at about 12:30 pm on Friday, after he apparently escaped with a money bag after robbing a Brinks company armored car with a knife.

In the Friday morning incident, Santa Monica Police said a Brinks security guard fired two gunshots toward a knife-wielding man who approached an armored truck parked on Arizona Avenue and the Promenade.

The gunshots sent the crowd running on the Third Street promenade. The uninjured suspect was later arrested with a knife and a money bag. No one was injured in the incident. 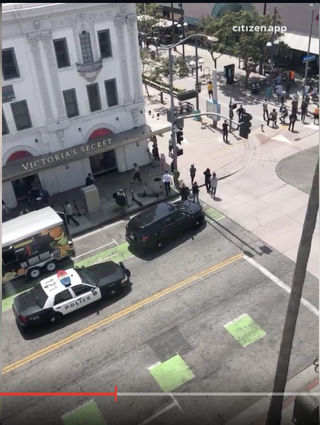 Armored car robbery as seen from a third floor video taken above Third and Arizona Avenue.

At 1 pm, witnesses reported police activity reported at 4th and Pico Blvd, it is unclear whether police were searching for the same man (this location is about a block from SMPD headquarters).

Multiple news sources indicate that police are investigating a report of gunfire in this area. It is not known if the suspect was wounded.

Santa Monica Police have asked people to avoid this area while they conduct an investigation into the incident and the shooting.

Two armed robbery incidents in two days have been reported in Santa Monica.

Multiple residents on social media have reported a jewelry store robbery in the 1300 block of Montana Avenue Thursday afternoon. Santa Monica police searched for suspects or weapons, at Wilshire and Lincoln, and also at Euclid and Idaho Avenue. Police have yet to comment on the incident