Steele's work as a whole feels other worldly which he explained is due to him having "the truth being portrayed as fiction." 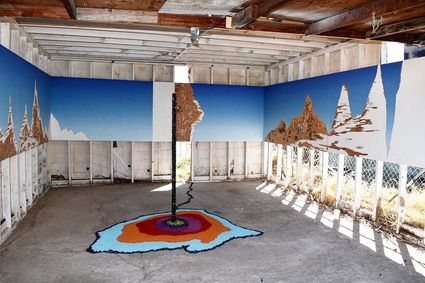 Having grown up in both a cult and suburban Americana, artist Timothy Uriah Steele provides a unique and provocative journey with his work to showcase transcendence. When asked for his personal definition of transcendence, he described it as a "means to pass beyond the confines of an everyday...reality into something that's beckoning you into something other or... a broader perspective of life and what it means to exist."

Instead of the results of before and after or known and unknown, Steele is intrigued by the feeling and process of transcendence or in his own words, the "tension of being called to an other." He described transcendence as a savior of sorts, with individuals being transported into better situations or having an improved outlook on life. Because of this, he wants viewers to understand and feel the process of this transformation.

Transcendence is ambiguous so it can evoke numerous emotions, such as a sense of unease or awe. Instead of taking transcendence in a literal sense, change, Steele wants viewers to connect with the idea of awe and the sublime. He aims to expand what defines reality as a change in the "degree of intensity" of a situation.

I initially thought this contradicted the descriptions of his work as "magico-religious," but I realized that his work is not magic nor religion based, but instead is provoking a "relationship with the sacred." After conversing further, Steele explained that an example of this is with voodoo dolls. Thus, the term simply puts into words the concept of intentional actions for intentional change.

Transcendence is represented in Steele's work as a portal which usually takes form resembling an eye. While the similarity to an eye is not necessarily intentional, it consists of many circles inside each other to show a "point of rapture," or an opening. Steele's work as a whole feels other worldly which he explained is due to him having "the truth being portrayed as fiction."

Currently, Steele has his Scrying A Blue Future on display at the Bombay Beach Biennale. This program features artists who stay in Bombay Beach for two weeks and create work to show the ecological damages the area has faced. For Steele, his work was his response to the damages he saw in the mostly-abandoned town, which included a beach of fish bones and piles of trash around town as there was no trash pickup.

When asked if the two week time allowance was difficult to work with, Steele explained what would normally take him three days to perfect would only take him eight hours. For instance, Steele dyed sand from the beach for a gradient in the piece and instead of needing to redo it, he liked how it appeared first go-around. 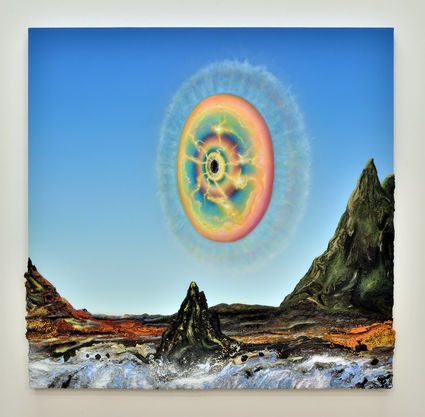 Steele felt Bombay Beach had large amounts of spiritual energy which produced "anomalous feelings," including beauty. Scrying A Blue Future is described by Steele as "an apology to the spirit of the place" so he tried to evoke strong mythical emotions, which can of course be seen by the portal. This piece has similar themes to his other works, such as questioning what is weird and the concept of the other.

Scrying A Blue Future as well as other works in the Bombay Beach Biennale can still be seen in Bombay Beach until March 2020. Viewings are by appointment only. Prints of his piece The Pacific Ocean Longing to Devour Untethered Hearts / The Moon's Jealous Push to Reclaim Lost Ground are available for purchase exclusively on his website: https://www.timothyuriahsteele.com/shop.