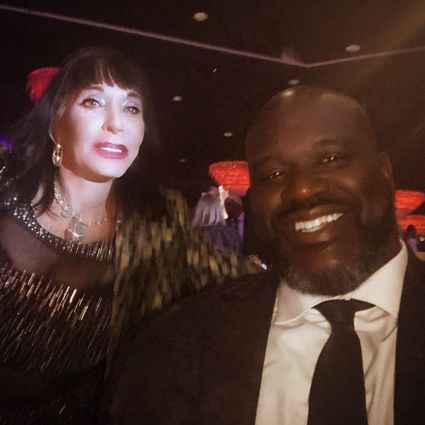 The Pump Foundation was founded in 1999 by Dana and David Pump along with their mother Carole to honor and pay tribute to their late father, who had lost his fight to cancer in the same year.

The Harold & Carole Pump Foundation Mission Statement is the single minded loyalty to fight cancer via early detection, state of the art equipment, treatment, and research. The Northridge Hospital, through their assistance has become a role model in the San Fernando Valley area for cancer detection and treatment.

On the Red Carpet I got to briefly interview with Sugar Ray Leonard, who is a wonderful man who generously donates to many charity foundations, told me that he has a big sweet tooth and addiction to junk food like chocolate, ice cream and bags of popcorn. Obviously his exercise routine of lift weight and cardio keep him youthful and svelte. 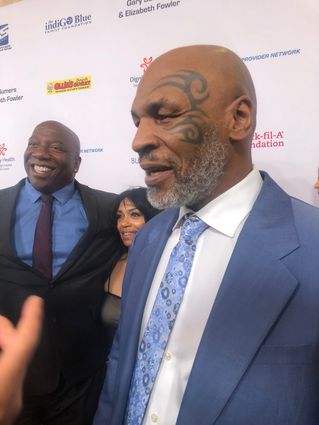 Mike Tyson on the Red Carpet

The highlight of the evening for me was when I ran into Shaquille O' Neil and his son at dinner and he insisted on taking a selfie with me. About 11 years ago, at Sports Club West LA ( now Equinox ) on a quiet Thursday night around 9 PM a very tall big black man came up to me while I was shooting some balls on the basketball court and asked if he could play with me. As an x tom boy as a child, and great basketball player for a girl, it was easy for me to beat men at the gym in a game of Horses with my trick shots, but that night I could not even get one point win against this man. I told this very tall big man that I have seen a lot of men play but he should quit his day job and try out for basketball... that he had a special aura and could be a professional basket-ball player. After about 12 minutes he went off to play basket-ball with an entourage of men. Suddenly many men came up to me and asked me how I knew Shaquille O'Neil... I was very embarrassed that I did not recognize who this great basketball player was.

It was truly amazing that Shaquille O' Neil recognized me and what a great humanitarian that he insisted on taking a selfie with me!

The Harold & Carole Pump Foundation Gala was extremely successful in raising thousands of dollar through it dinner ticket sales and silent auction items. It was a fun filled evening with great entertainment and engaging sports figures