Excavation of water main from California to Washington and traffic diversion continues Monday. 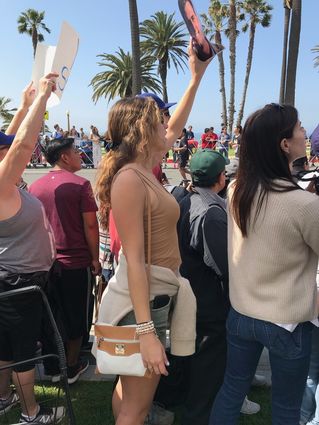 The finish line at the LA Marathon on March 29, 2019. ‪Water main break closes Ocean Avenue all day Saturday. Underground pipe must be excavated from California Avenue to Wilshire.

One of America's most famous and beautiful streets, Ocean Avenue remains closed to traffic this week as workmen excavated a water main on an emergency basis to repair an underground water pipe.

According to a warning from the City of Santa Monica, Ocean Avenue will be closed to traffic in both directions until Friday 8/16. Northbound lanes will be closed from Monday 8/19 to 9/13/19, said the auto notification,.

At noon Saturday August 10, the City of Santa Monica announced that the 1100 block of Ocean Avenue will be closed to traffic until 7 PM Saturday night. "Update on the earlier street closure due to the water main break. Ocean Ave will remain closed from Washington Ave to California Ave until approx 7pm. Use alternate routes."

The underground pipe dates back at least 35 years, and is split along an unknown length from North to South. Hotels and other buildings on Ocean North of Wilshire and South of Washington were without water Saturday morning. 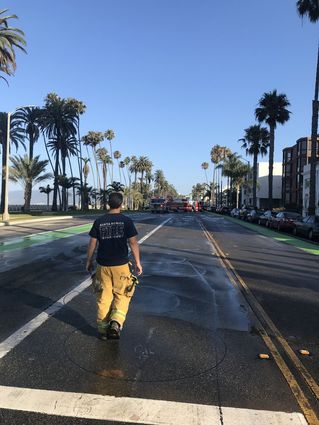 A Santa Monica fireman walks Down Ocean Ave., Saturday morning as the road is closed for a water main break

Water main breaks in Los Angeles County are not unusual. LA was planned for 2 or 3 million people, and is now inhabited by over 10 million, straining the underground infrastructure constructed in the 1950s or even before. A massive water main break on Sunset Boulevard in August 2014, flooded most of the UCLA campus. That pipe had been installed in 1914, a hundred years before.

Ocean Avenue starts at the residential Adelaide Drive on the north end of town and ends at Pico Boulevard. Ocean Avenue is the westernmost street in Santa Monica, and for most of its course it runs parallel to Palisades Park, whose bluffs overlook Pacific Coast Highway and Santa Monica State Beach. This according to Wikipedia.

There are several luxury mid-rise and high rise condos with views overlooking the Pacific Ocean, Santa Monica Beach, Malibu and the Santa Monica Mountains. The Third Street Promenade is two blocks east. The Santa Monica Pier is located at the intersection of Ocean and Colorado.