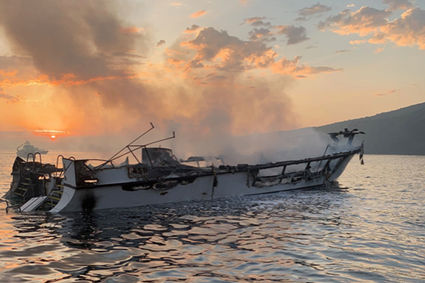 A catastrophic fire aboard the California dive boat Conception killing 34 may have been caused by Li-ion batteries or their charger says the boats designer, Roy Hauser. "This had to have been, in my estimation, one of those lithium battery chargers," Mr. Hauser told The Los Angeles Times and "there were electrical outlets in the bunk room" added Hauser.

A dive instructor notes some boats no longer allow passengers to charge devices in bunk rooms due to the fire risk.

The 34 who died on the Conception represent the largest loss of life at sea, in modern California history. One might expect the boat's designer to blame the tragedy on something out of his control. On the other hand, fires caused by lithium ion batteries are a known risk.

Many who have been passengers on that boat report that there was a "cellphone tree" below decks, with 14 phones and devices, all plugged in and charging. Samsung Galaxy devices, iPhones and various notepads have from time to time, started fires, generally when their lithium batteries overheat while charging. Such incidents do not occur every day, but they do happen from time to time.

The National Transportation Safety Board and other government agencies are still investigating the Conception disaster, and no official cause of the fire or report has yet been issued.

The above discussion of batteries taken from: https://www.TheCounterfeitReport.com