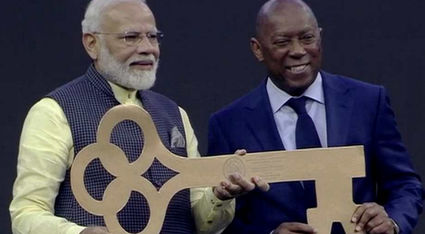 Prime Minister Modi with the Mayor of Houston

Sunday the 22nd of September is a historic day for the USA when a sitting US president was a guest in the largest gathering of a foreign head of state. Indian Prime minister Hon Narendra Modi spoke to the largest gathering in the US of over 50,000 in Houston, Texas on Sunday. In what is being described as an unprecedented gesture of solidarity, US President Donald Trump was present in Houston to share the stage with Indian Prime minister Narendra Modi during his mega rally. The gathering included members of the Indian American diaspora, over 60 eminent lawmakers, Congressmen, prominent politicians, Texas Senators, Mayor of Houston and of course the President of the United states, Donald Trump. The official statement from the White house was " This event will be a great opportunity to emphasize the strong ties between the people of the US and India. It will also reaffirm strategic partnership between the world's oldest and largest democracies".

This was Modi's second mega rally, the first being held in New York to an overwhelming crowd of Indian diaspora as well as NRI's- Non Resident Indians from around the world. This was the biggest event on US soil, with 1500 volunteers, 650 community organizations, Americans from all faiths and cultures coming together to welcome a foreign leader. The event took place at the NRG stadium in Houston, Texas. Modi has been a "Rock star" politician wowing crowds wherever he goes and making a formidable impression on the global state amongst global leaders.

The reason for this meet was several –fold. Although they make up only 1% of the US population, Indian Americans are the most educated and richest of all the ethnic groups in the US, including white Americans. They are increasingly an important vote bank which is known to donate and support various politicians and candidates. This group is increasingly becoming ever attractive to US Congressmen and candidates. It would be wise of President Trump to entertain a crowd such as the one in Houston, Texas. Trump was playing his "Trump" card to sway some of the Indian voters, who traditionally vote democrat in his favor, particularly in Texas, a large, swing state.

Trump thanked the Indian American community for their contribution to the US and applauded Modi on removing 300 million Indians out of Poverty in the last 5 years. He re-iterated that India will have a true friend in the White House with his administration. He also noted the launch of NBA in India with the first NBA game to be played in Mumbai next week- he jokes if he was invited as he may show up!

Trade of course was discussed and some important announcements made between US- Indian relations. Bi-lateral talks with India and US in the matters of trade will be discussed ahead of the United Nations General Assembly and a breakthrough around Tariffs is expected to be achieved. Investment amongst both countries was seconded by both leaders. Modi joked that Trump calls him a Master negotiater but he has learnt a lot from Trump himself who did write the Art of the Deal"!

PM Modi spoke about development in India and the emergence of a Digital India. He quoted that "Data is the new oil " and articulated how Data can be consumed for the lowest price in the world in India and how it aspires to be the tech capital of the world.

The fight against global terrorism was discussed and the need to curb it. Even in the matter of the withdrawal of US troops from Afghanistan, the US is rethinking its options and strategies. It has been over dependent on Pakistan on this matter in the past, but that is coming to pass, with Pakistan's continued support for terrorism in the region.

The issue of Kashmir no doubt came up. The PM spoke about the recent abrogation of Article 370, a discriminatory, sexist and racist law whose removal was welcomed by the whole country of India. It has left only the terrorists, separists, and corrupts dynast political heads upset. The whole world, including the UN, EU, US government and Trump all agree that Kashmir is an internal matter of India and backs India's decision. Modi in no uncertain terms made it completely clear that the removal of Article 370 was a triumph for humanity and equality for all. The removal was passed with overwhelming majority in both Upper and Lower house of the parliament and was telecast live worldwide.

He also called out with out naming Pakistan, the largest state sponsored terror factory in the world. He said "whether it is the 9/11 attack on the US or 26/11 attack on India, we know exactly where global terror comes from and we need to fight it". President Trump stressed that the US is an important player in the fight against global Islamic terror. He pointed that the two countries share a common love for liberty, freedom and democracy.

Houston police had been briefed already on a potential disruptive ruly protestors made up of Pakistanis, Khalistanis and Muslim groups funded and propped up by the ISI- the intelligence arm of the Pakistani army that is known to fund terrorism across the border as well as around the world. Tight security measures were in place to ensure that safety ensues and that there is no terror or violent threat to any of the attendees as well as of course the leaders of the free world. After president Trump's attendance confirmation, the organized protests had toned down their threats, as this now becomes an issue of national security.

The rally ended with a "Lap of Victory" around the arena with both Trump and Modi gracing the stadium with their presence. The two leaders could not have asked for a better set of optics or imagery for their nations and their own political futures. The NRG stadium had an electric sensation during the event, reaffirming a historic alignment between India and USA.

This was an historic event for Indian Americans, and will be the biggest event on US soil, after the Pope's visit. It was an important and effective event; with Houston hearts beating for Modi!