Mayor Garcetti Denies Fire Started in Homeless Encampment Next to 405 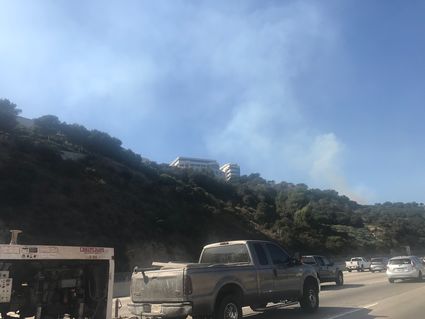 Smoke rises above the Getty Center

A fire that broke out around 1:30 am on Monday Morning near the Getty Center, burned at least 500 acres of pricey Westside land, from the 405 Freeway West into Brentwood. The Los Angeles Fire Department responded with trucks, men and water dropping helicopters.

Residents were evacuated in a mandatory evacuation zone that extended West from the 405 freeway, to Chautauqua from Sunset to Mulholland.

The evacuation area included 10,000 structures with a population of around 20,000 people, one fire fighter noted.

At a press conference, Los Angeles Mayor Eric Garcetti specifically denied that the fire broke out at a homeless encampment filled with "unhoused Angelenos," which of course made many believe that was precisely what had happened.

While the day was relatively cool, with temperatures in the 60's, the wind in the hills was high and out of the North East. "A typical Santa Ana event," said one Fire chief at a press conference.

The New York Times posted: A brush fire that broke out early Monday morning on the western side of Los Angeles quickly consumed 500 acres, created gridlock on the 405, the nation's busiest highway, and resulted in mandatory evacuations. 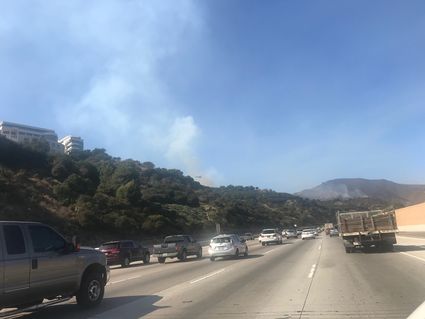 Smoke rises above the Getty Center

The fire, known as the Getty Fire, forced officials to seal off main interchanges of the 405 by midmorning. Offramps through the Sepulveda Pass, near where the fire started, were closed.

"This is a fire that quickly spread," said Mayor Eric M. Garcetti of Los Angeles at a news conference shortly after 7 a.m. local time. "It is now over 500 acres, but we luckily had a lot of amazing heroes that were in our fire stations who rolled out immediately. We have over 500 firefighters that are on the line right now, in some of the most challenging topography of Los Angeles."