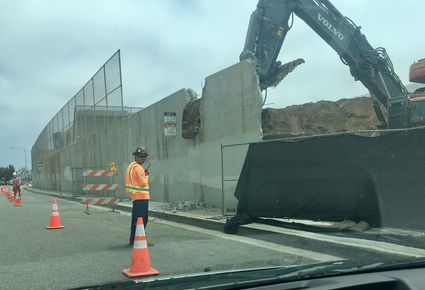 Recent construction at SamoHi. After numerous complaints, the city's Public Landscape Division halted it's move to the Santa Monica airport. Residents want to see a park there. But the City Staff thinks otherwise.

Following a unanimous resolution by the Santa Monica Airport Commission opposing construction of a 'temporary' facility for the city's Public Landscape Division (PLD) at the airport, and numerous articles in local newspapers about it, the City Council directed the construction be halted.

Construction of an $800,000 facility for the PLD, the division that takes care of the city's parks, began at the airport over the summer, surprising and alarming nearby residents, who'd been given no notice. With their questions ignored by city staff, residents were forced to file California Public Records Act request in order to learn of the plans to move the city's landscape division to the airport. The PLD is being forced to move from their current location at the Colorado Yard because of upcoming improvements to nearby Memorial Park.

Once residents learned of the city's plans to move a noisy, smelly, city operation right next to their homes, with early morning activity and heavy truck traffic, they were not happy.

Following two meetings between the public and the Airport Commission, the Commission voted 5-0 on November 19 to oppose the planned construction. In their resolution against it, the Commission noted that the City Council had never directed staff to move the PLD to the airport nor approved construction there. Only the council has the authority to direct the use of the airport. In addition, no public process had been followed whatsoever to give public information or gain public input into the planned development. In a stinging rebuke to the council, who demand every private developer in the city go through a lengthy public process to gain approval for their projects, the Airport Commission wrote the "fundamental lack of democratic process is deeply troubling."

City Manager Rick Cole and Public Works Director Susan Cline are taking the fall for our elected leaders. They acknowledge an "error" was made and now propose to work with residents to figure out an appropriate public process to discuss the proposed move of the PLD. "We look forward to developing a workable plan for relocating (the PLD) by the end of 2020 so that we can deliver a new Memorial Park and maintain parks citywide," said Constance Farrell, City Spokesperson. Meanwhile, Mayor Gleam Davis claims she'll support finding another location for the PLD if such a site can be found.

In other words, the city, both staff and elected leaders, have agreed to delay the construction of a facility for the PLD at the airport. But it will happen. Sure, they'll go through the motions of listening to public input, and then they'll go ahead and do what they wanted to do in the first place. They'd already decided the airport was the only viable place to put the PLD since they figured out they didn't have enough money or room to move it to the City Yard on Michigan, even though the Yard is undergoing an expensive renovation.

But there's even more ugliness to this mess.

Who made the decision to begin a $800,000 construction project at the airport?

It was either the elected City Council or it was paid city staff. Either choice is bad. 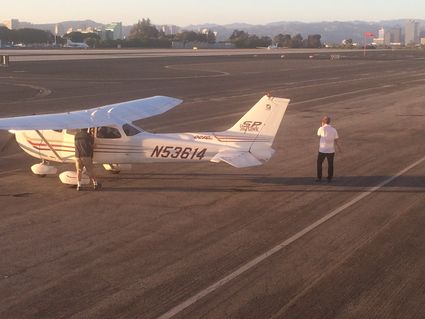 After numerous complaints, the city's Public Landscape Division halted it's move to the Santa Monica airport. Residents want to see a park there. But the City Staff thinks otherwise.

If the council approved the project, then the elected leaders of this city were complicit with a plan to disregard every law and policy to which they hold the public. They directed a large construction project be started, with all kinds of potential consequences on the level of the environment, traffic, and the neighborhood, with absolutely no notice, no special approvals - nothing. They just decided they wanted to do it, and directed it be done. The laws that apply to the public did not apply to them.

But the other choice is no better. If the council did not approve the project, then they have a staff that is wildly out of control. That would mean city staff go around allocating nearly a million dollars in expenditures without any approval from elected leaders. The staff don't believe they have to follow any kind of laws regarding public process. They don't even have to get approval from their own bosses, the elected leaders.

So who's in charge here? And to whom do they feel they must be accountable?

Apparently not the public.

Wow. The buyers remorse never ends for the folks that bought houses next to the airport, does it? Meanwhile, everyone else in Santa Monica pays the price for their decisions they now regret.

This construction is totally inappropriate to the neighborhood and the land it is on. It should be removed quickly. It is a shame that the city began the work in question without the typical public process. But what really matters is what transpires from here. Under no circumstances should this blight go forward. It will increase traffic and pollution and noise in a strictly residential area. Not to mention -- the site is located just a few yards from Hill & Dale preschool, and the anticipated increase in traffic and activity is sure to prove detrimental to the safety of the children who attend and their families. Surely the PLD and its hardworking employees can be moved to a more appropriate light industrial or industrial area.

Thanks Observer for unpacking the situation clearly. This attempted illegal move highlights increasing boldness to overstep rules and boundaries as well as disregard residents until they make an embarrassingly loud noise. Maybe if the city did not give up City Yard land for Bergamot development parking and approve a hotel at Bergamot the City Yard might have accommodated the Landscaping Dept. Gifts of public land and approval of overdevelopment are catching up to haunt our officials. No land left for Public Works parks except next to homes? A landslide of bad decisions are adding up and the tip of the iceberg is breaking the water with more hiding below the surface.

Excellent piece. This story should not be allowed to just fade away over the next twelve months until the city ends up doing what it wanted to do all along anyway. The city is counting on people eventually forgetting over time, but this matter should be turned into a regular and increasing embarrassment for them until they come up with a different plan, preferably one where they're forced to follow their own rules.