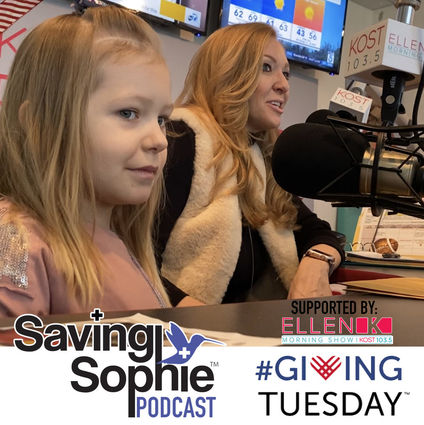 SavingSophie.Org has officially launched its informative podcast ﻿in time for Giving Tuesday 2019

SavingSophie.Org has officially launched its informative podcast in time for Giving Tuesday 2019. The purpose and mission of the podcast, hosted by Tracy Ryan, (the CEO and founder of Cannakids, Saving Sophie, CKSoul cannabis and Hemp - and co-hosted by her seven year old daughter Sophie) is to generate support and critical awareness for the groundbreaking Medical research of renowned cancer expert Dr. Anahid Jewett. Tracy was introduced to Dr. Jewett through a mutually known nurse practitioner. This led to Tracy joining forces with Dr. Jewett to find a cure for cancer. Although their paths and approaches were different, their destination was the same, therefore, this was the path by which they embarked on their relentless journey together. This partnership has already made an undeniable impact on speeding the rate of discoveries in cancer research in order to help in extending life of those inflicted with cancer.

Tracy has individually spent years tirelessly researching a cure to save the life of her beloved daughter Sophie, who having battled a brain tumor is now miraculously living her first year without chemotherapy. Tracy is also launching and branding new healing products and a hemp collection.

Later this month, the results of Dr Jewett’s cancer changing research will be unveiled with the hopes of eventually changing the scientific approach to how cancer is treated and how we perceive cancer forever.

***The fight to eradicate cancer, through the effective support of our own Natural Killer cells, with the added strategies such as essential Cannabinoids - will be tested in hopes of bringing non-toxic cancer treatments for those suffering from Cancer globally.

The Saving Sophie podcast is set to raise the bar for medical insight and unique knowledge and provide direct access to healing aids, Doctors and provide updates on science breakthroughs as well as have celebrity guests stop by to share their own stories, experiences and battles.

Sophie Isabella Ryan was born October 3, 2012, perfectly healthy weighing in at 8 pounds, 7.4 ounces. Her birth had zero complications and had the perfect pregnancy, doing everything right by way of diet and constant checkups with OB. On June 20, 2013, Sophie had her first MRI scan after nystagmus, shaking of the eyeball, presented in her left eye. On June 23rd, at 8 ½ months old, Sophie was diagnosed with a low-grade, Optic Pathway Glioma brain tumor. Sophie’s parents, Josh & Tracy Ryan, were originally told that her only option would be a 13-month protocol of chemo in hopes to stop the development of the tumor, but these tumors have an 85% recurrence rate despite the high survival rate. Since it is a slow-growing tumor, chemo was never meant to get rid of the tumor, and doctors told us if they saw even minimal shrinkage it would be considered a huge success, and the goal was to stabelize it permanently.

At this point, after succumbing to an emotionally devastating situation, Tracy & Josh decided to dust themselves off and look for other ways to save their daughter outside of just Western medicine alone! After creating a Facebook page called “Prayers for Sophie,” a friend on Facebook put them in touch with Ricki Lake and Abby Epstein, who were filming a documentary about how cannabis oils kill cancer in pediatric patients. Tracy was originally inspired to try for a natural birth after watching their first documentary, The Business of Being Born, so Tracy knew if these ladies were now focused on a film about cannabis, there had to be something to it! These women worked hard to surround Tracy & Josh with the top oil makers and experts in California, and so their journey to healing their beloved daughter Sophie began!

Sophie has been on high-concentrated THC and CBD cannabis oil since she started chemo in October of 2013. The only side effects she ever had was a little sleepiness that completely went away as she acclimated to the oils. Despite 6 long years of chemo, Sophie continued to gain weight and had a better quality of life than would have ever been expected. The doctors attributed dozens upon dozens of miraculous occurences to the cannabis oils including tumor shrinkage, expedited immune system and bone marrow repair, and also her incredible ability to have next to no trauma from surgeries. Surgeries as invasive as a 7-hour brain tumor surgery where she left the hospital after less than 24 hours and was told she could go back to school the following day, showing no visible signs of swelling or bruising, the doctors simply couldn’t beieve their eyes.

Sophie is now part of Dr. Jewett’s NK Cell research at one of Southern California’s top universities, where the Ryan’s are hopeful better treatments can be discovered for patients like their daughter.

For more information and to learn how you can make a difference, please go to: http://www.CannaKids.org