An interview with restauranteurs Rick Rosenfield and Larry Flax, about pizza, fairy tales and fish. 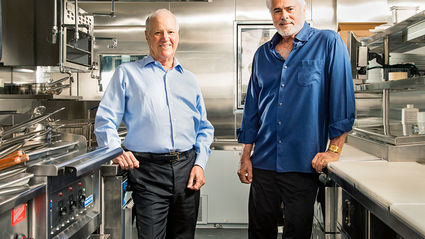 Rick Rosenfield and Larry Flax follow up on their CPK success, with Bottlefish restaurant

Rick Rosenfield and Larry Flax founded California Pizza Kitchen in 1985;  today it has over 270 locations in 30 states and 11 countries; along with a presence at major airports, college campuses, sports stadiums, and the frozen section of grocery stores.  In 2016, the very successful duo launched Bottlefish, raising the question, could Bottlefish be the next CPK? We decided to dig deeper, and the partners graciously obliged.

Q:  The two of you have managed to maintain a long and very successful relationship;  what is your secret?

L & F: We've been best friends and business partners after we met as Federal Prosecutors in Los Angeles. We quickly formed a partnership and went into the private practice of law 46 years ago. The secret has been a unique synergy and mutual respect with one another. Most importantly, we've always said that neither of us needs to be proven "right"; we always come to a decision that we both agree upon.

Q: Beyond just personal compatibility, are there some approaches that you have developed to avoid friction, e.g., taking on different responsibilities?

Q:  Do you think CPK has changed much since you left it?

L & F:  When CPK was sold to a private equity investor eight years ago, we didn't have a relationship with the new CEO, so unfortunately, we lost contact. One aspect of the business that we watched develop was an expansion of the menu to include such items as a ribeye and halibut and the reduction in the number of pizzas and salads, which we believed to be the core of the menu. The head of Culinary Development, Brian Sullivan, who has been with CPK for 30 + years and with whom we worked, has done a great job in maintaining the restaurant's food and service quality. We still think CPK has the best and most consistent food quality of any chain. Also, we have an excellent relationship the new CEO Jim Hyatt who has been with CPK almost two years now.

Q:  CPK was a very successful franchise, but you did not repeat that path for your second venture, in fact you went in an almost opposite direction – with a neighborhood restaurant;  what was your thinking there?

L & F:  We don't agree with the premise of that question. Indeed, the success of CPK was that it started as a neighborhood restaurant and while it became a "chain," it essentially retained its character as it expanded. In each community it called home, it became a part of the neighborhood. It was very important to us to become involved with local charities, schools, etc. Similarly, while Bottlefish has started as a neighborhood restaurant, we've always envisioned it as expanding to other, similar neighborhoods. Bottlefish was inspired by our belief that there was a dearth in upscale, high-quality, seafood-centric, neighborhood-oriented restaurants. We are proud of this restaurant and see future opportunities for Bottlefish.

Q:  Are the challenges of a neighborhood restaurant very different, and have you had to adapt much?

L & F:  One aspect that has been challenging is that unlike CPK's typical location in a high-traffic retail center, Brentwood Gardens is a small, neighborhood center. Accordingly, we are more of a "destination" and don't get the impulse traffic that CPK experienced at various retail centers. We recently opened for lunch and are now building that business through word-of-mouth with a very exciting, relevant lunch menu and approachable prices.

Q:  Is there a process for how menu items come about at your restaurants? Do they start with you, or the chef, and then you try to arrive at consensus? How much, if at all, do your own preferences come into play?

L & F:  We create menu items the same way that we did at CPK, however without the benefit of a whole culinary department! One of us, or Chef Ohad, comes up with a menu idea, it's discussed at one of our frequent menu development meetings, and we work on iterations to refine the item. Ultimately, it's our presences and instincts that lead to the final decision. The fun part is that, just as at CPK, the customer is ultimately the judge. If it's popular enough, it stays on the menu.

Q:  Do your families – wives, kids, get involved much in the business, and how?

L & F:  Our families have always been supportive and involved since both restaurants' early inceptions. In fact, Larry's granddaughter created the children's Honey Chicken Pizza, which sadly has since been taken off the menu upon the selling of CPK. Larry's extended family came on board the restaurant ventures in 1989, when he married his wife, Joni. Her son Peter, along with Rick's son Ian, became Rick and Larry's quality assurance team, travelling all over the country playing an important role in the quality menu and service consistency of CPK, a key component of the brand that has been very well-acknowledged. Peter went on to be CPK's Vice President for Domestic and Foreign Franchising, but stepped away when CPK was sold to join Rick and Larry in the development of Bottlefish.

The wives of Rick and Larry have also shared their passion for the originality and quality of menu, and have been true life partners through the development of both restaurant concepts. At Bottlefish, Rick's wife Esther has been very involved and is at the restaurant most nights interacting with guests. It runs in her blood, as she was the very first hostess at the original CPK in Beverly Hills, going to the restaurant every night while Rick often stayed home with their three-year-old daughter, Nicole.  Their other daughter, Dana, is a graphic designer and was instrumental in the creation of Bottlefish's logo, menu design and brand positioning, and remains actively involved.

Q:  How do you respond to changes in the restaurant industry?

Larry: Watching restaurant trends and the interests and desires of various generations and demographics has always helped guide us in our restaurant ventures. Sometimes understanding this input leads to a discovery like the BBQ Chicken Pizza and the demand for the open fire pizza oven. With Bottlefish, we found another palette for creativity in a seafood restaurant. The excitement over small plates led us to create a novel and creative area of our menu, something very different than more traditional seafood restaurants. We also learned that we could introduce other ethnic influences on our menu. Understanding what's happening in this industry, at all levels, keeps us creative and on our toes in this ever-changing restaurant world.

Q:  What do you think of the vegan and plant-based cuisine trend, and where do you see it going?

Rick: I'm particularly interested in this topic since in the past year, I've shifted my personal diet to add a significant number of plant-based items. I believe the explosion of meat substitutes is part fad and part trend; the fad part is that just because an item doesn't contain meat doesn't necessarily make it healthier. It's important to understand the ingredient list and the nutritional information of the substitute. The trend part, though, is that there is increasing science supporting the health value of plant-based foods, and of course, with the focus on sustainable practices and the beneficial effects on the environment, I expect the positive movement toward plant-based foods to continue. We offer a variety of plant-based items at Bottlefish, and our seafood items are environmentally friendly, all being approved on The Monterey Aquarium's seafood watch list.

Q:  Do you think it has become significantly harder for new restaurants / concepts to launch now?

Q:  Chef Ohad, you grew up with Israeli cuisine;  how does that show up in the menu?

O: I like to incorporate light cultural interpretations of familiar seafood plates when I can, so Israeli cuisine does make appearances in our menu at Bottlefish. For example, our signature grilled shrimp is served atop a traditional saffron rice, and the seasonal Moroccan fish dish is a version of one I grew up eating. In general, a lot of the spices I use are more like the ones found in the markets around Jerusalem.

Q:   I hear you run your kitchen with Israeli military efficiency. Can you give some examples?

O: To keep track of inventory and production in the kitchen, I use a lot of checklists and tools so that everyone on the team-including the front-of-house and back-of-house-knows the standard I'm setting and can easily communicate with each other, even when we are on different shifts. This is something I learned from my time in the Israeli Defense Force, and helps us grow, learn, and achieve our best as one team.

Q:  How does your background in Pan Asian cuisine get expressed at Bottlefish?

O: From my past experience in other kitchens, I have brought certain cooking techniques from Pan Asian cuisine to the menu, such as the Thai BBQ Ribs dish. Also, many of the flavors I use to give each dish its own personality come from a variety of influences I've had as a professional chef.

Q:  Your website brings up sustainability; how does that get expressed at Bottlefish?

O:  We use green composting buckets for all food scraps at the restaurant to eliminate food waste where possible, and are also committed to recycling. On the sustainability side, we care about not only what we serve to our guests, but also how it comes into our kitchen. We proudly source our seafood responsibly and locally from Santa Monica Seafood, with every item adhering to the National Seafood Watch program. 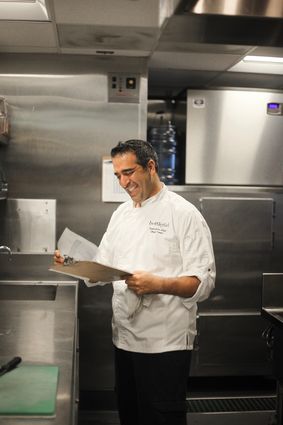