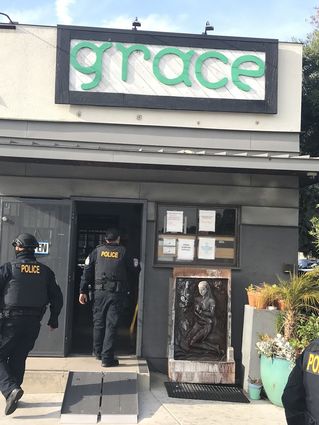 Bureau of Cannabis Control, Cal. Dept of Fish and Wildlife, LAPD all participate in December 10th raid on a West LA marijuana dispensary.

The BCC, LAPD and Dept of Fish and Game and other agencies participated in the 2 pm Tuesday raid of a purportedly illegal marijuana clinic on Tuesday afternoon, December 10th. At least 20 officers were seen lining up the rather genteel looking staff from Grace on a Pico Blvd sidewalk, handcuffed as they chatted with each other about holiday plans.

"Dude. It's like, totally legal to sell weed in California. But you got to get the permits first, dude. And pay the taxes," explained one officer, as he served a warrant. Ok, I made that up, but it's what I would've told the owner.

Grace Dispensary is located on Pico Blvd, East of 33rd Street. Grace should not be confused with Erba, which has all necessary permits and is less than a block away. Bureau of Cannabis Control, the California Dept of Fish and Wildlife, and the Los Angeles Police Dept all participated in the December 10th raid.

Reducing illegal activity is considered essential for the success of legal operations who pay the considerable taxes assessed by state and local authorities. Many people do not have nearby retail stores selling cannabis and continue to buy from unlicensed sellers. Illegal growing continues in remote rural areas. Raids and confiscation by law enforcement of illegal retail and grow operations has continued and in some cases stepped up after legalization.

California's main regulatory agencies are the Bureau of Cannabis Control (BCC), Department of Food and Agriculture, and Department of Public Health.

“In California, we have a challenge with the illegal cannabis market, and as we’re trying to stand up the legal industry, we’re also trying to minimize the illegal industry,” Alex Traverso, spokesman for the Bureau of Cannabis Control, told the Los Angeles Times. “Part of that is following up on complaints we receive about unlicensed shops, and a pretty large portion of the unlicensed shops happen to be in Southern California.” https://www.latimes.com/california/story/2019-12-12/authorities-shut-down-unlicensed-dispensary-in-palms

The Times, reporting on the raid and shut down of Save Greens dispensary in Palms, quoted Traverso as saying the illegal pot maarked in LA County is three times the size of the legal market. 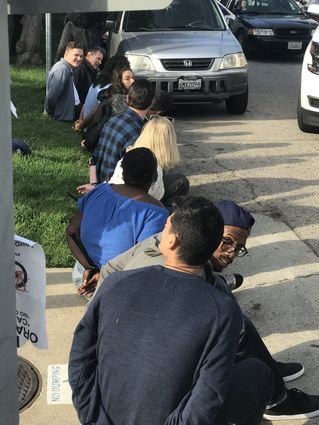 At least 20 officers were seen lining up the rather genteel looking staff from Grace on a Pico Blvd sidewalk, handcuffed as they chatted with each other about holiday plans.

The State of California has been at the forefront of efforts to liberalize cannabis laws in the United States, beginning in 1972 with the nation's first ballot initiative attempting to legalize cannabis. Cannabis in California is legal for medical use since 1996, and for recreational use since late 2016.

Following recreational legalization, existing growers and suppliers of medical cannabis were required to register, comply with regulations, and apply for permits.

Over half of the nonprofit dispensaries legally providing medical marijuana closed. Local agencies have been slow to approve retail stores selling cannabis for recreational purposes with most cities and counties banning retail with a wait and see approach.

Many existing growers have been slow to apply for permits as it has been estimated that 60 percent or more of all cannabis consumed in the United States comes from northern California. The export of marijuana to other states remains illegal since the U.S. Drug Enforcement Administration considers it a Schedule 1 drug.

Grace Medical was raided and closed down on December 10, 2019 two days before they were scheduled to for an appeal with the Department of Cannabis Regulation after which Erba would have been forced to close down. Grace Medical was operating legally, paying taxes and no charges have been filed. This article is such an obvious hack job just like the raid was an obvious case of corruption.

I stand behind Grace! Genteel staff yes because they are all verynice and caring people. Grace helps hurting and ill people and offer way more than medicinal support. They even give compassion weed to vets and mental health patients free if they can't afford to buy. The sheer mention of herba in this article makes me smell a rat! Understandibly so since there has been contention since Grace and herba used to be partners and because of herba owners greed they are not anymore. Somebody in herba (uknowwhouare) keep bragging about being on city counsel and trying to shut them down. And herba still cant get Grace customers due to poor customer service staff attitudes and even worse products. herba affiluates have even broken into Grace many times to steal the better products. When they can't steal it they send the police along with reeling text just before it happens. So herba and their pedophile owners (truestory) can eat a d*@%... if they haven't already... ijs🤬... yall way wrong

So why is it that Santa Monica, supposedly a progressive city, STILL doesn't have a medical dispensary in our city limits? What is our city's problem with this after all these years? Why is our community turning so conservative?

THIS IS NOT OK! This is some tom-foolery. SO sad. Sooo many patients rely on this dispensary; it was the ONLY dispensary that focused on providing medicinal products for healing sick people versus all the rest of the dispensaries with their 'get high' culture. This is a travesty.

Stick to writing straight professional, articles please. All the “dudes” were distracting and kind of ridiculous. Makes it seem like a joke. Maybe it was.

The gentile staff? So, the staff aren’t Jewish?