$8.6 million in annual grants have not been audited in a generation 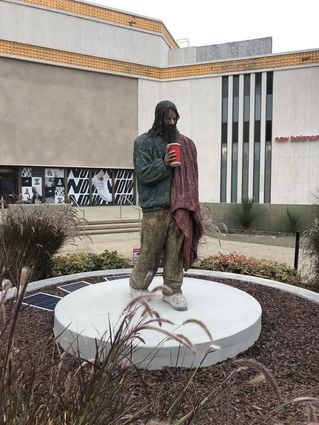 Statue of a homeless man in front of the former HQ of Home Savings. Like the statute, an online petition calling for more accountability in Santa Monica social services, has stirred controversy.

Santa Monica residents are circulating an online petition at Change.org, demanding that the City of Santa Monica perform annual assessments of its funding for social service agencies and programs.

"City staff publicly admitted that they do not prepare annual assessments," the petition says. "This lack of transparency and accountability is unacceptable."

Lacking a "realistic mechanism for annual assessments," Santa Monica "will continue to simply collect unverified, self-reported data from the providers, rubber-stamp it, and write a check for the next grant cycle."

"This petition was necessary, because the City is just about to remove the requirement that the City performs assessments," said one petition author. "The assessments are necessary to ensure that taxpayer money is spent efficiently and lawfully."

"The social services commission was asked to resign in February, due to their repeated failure to perform the annual assessments," she added.

"Like PAL and OPCC dba The People Concern, the failure to perform the proper assessments are precisely what went wrong in the process," she said.

The petition, available on change.org, appeared just two days before the City Council prepares to delete a requirement in the Municipal Code that the Social Services Commission to perform the audits.

A resolution approved by the Commission last month states that the City "professionalized the collection of data and evaluations" of the grants in 1982.

Since then, City funded programs have "expanded significantly. Therefore annual assessments are "beyond the time, resources, and expertise of a volunteer commission," states the resolution the Council will consider at its special meeting late Tuesday afternoon.

Annual assessments should consider participant complaints, states the petition, in order to avoid problems in the Police Activities League and The People Concern programs.

The petition may be seen at: