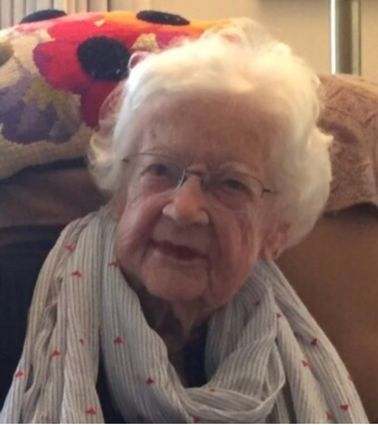 Shirley, our beautiful Mom, Grandmother and Great-Grandmother, died gently at her home in Santa Monica, California on December 11 at age 99. She was born in Hastings, MN to parents Johannes and Marie Nord and raised in Preston, MN and Madison, WI. Shirley attended St. Olaf's College and graduated with a nursing degree from the University of Wisconsin, where she then worked and met Robert F. Skeels. Shirley and Bob were married on April 22, 1944, and moved to Southern California to begin their life together, and ultimately to raise their three daughters in Santa Monica.

While the girls were growing up, Shirley was a Brownie and Girl Scout leader. She was very involved for many years with the Assistance League of Santa Monica, most especially on the Building Committee and with the Thrift Shop. In 1974 she served as league president.

Shirley was a master needleworker, seamstress, and knitter, an active member of two needlepoint organizations and of her church Prayer Quilt group. She was an expert baker and celebrated her proud Norwegian heritage in the kitchen with skills she passed along to her daughters.

Shirley loved traveling, reading, and learning. She worked as a lab tech and office manager at the Shelton Medical Clinic for several years. After her husband Bob's passing, Shirley married Eric Svenson, expanding her family to include his three children, their spouses, and five grandchildren. Shirley and Eric divided their time between California and New Jersey.

Shirley was a strong and compassionate woman, dignified and very fun-loving. Throughout her life, she generously gave her love and insight to all, and nurtured close connections among family members and with friends.

Shirley is survived by her sister Elizabeth Pope of Madison WI; her three daughters Joanne Enemark (Ed) of Santa Rosa, CA; Carolyn Lupe (Bob) of Denver, CO; Susan Rossi (Pier) of Malibu, CA; six grandchildren and eleven great grandchildren. We will miss her beautiful smile and positive spirit so very much and will live in celebration of her life, her wisdom and her love.