Unnamed man was in his 50's and it's not certain how he got in the way of the train. 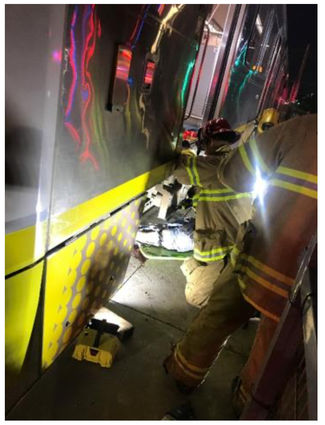 A homeless man was struck and killed by an Expo line train in Santa Monica on Sunday. He may have been drinking at the time.

Both the Santa Monica Fire Dept and Police Department, issued press releases describing the accident--unusual for both SMFD and SMPD to do. The SMFD release included photos, which are posted with this article. The SMFD press release by Fire Capt. Eric Himler, PIO reads as follows:

On Sunday January 26, 2020, at 6:09 a.m., the Santa Monica Fire Department responded to a reported pedestrian vs. train. Upon arrival fire resources found one person trapped under the wheels of the front section of a three-car train. The incident was in the 700 Block of Colorado. The patient was evaluated, and it was determined he was breathing and had a pulse but had sustained serious life-threatening injuries. A unified command was established that included, SMFD, SMPD, LA County Sheriff's and a Metro Supervisor.

Working around and lifting a train is a complex and dangerous operation. Members accomplished the task safely and quickly delivering the patient to the trauma center in less than an hour after dispatch. Unfortunately, the patient succumbed to his injuries at the hospital. Metro Officials and the Santa Monica Police Department remained on scene to conduct the investigation.

On Sunday, January 26, 2020, at approximately 6am, a collision involving a pedestrian (male/white, possibly homeless) and a Metro light rail train occurred in the intersection of Lincoln Bl and Colorado. 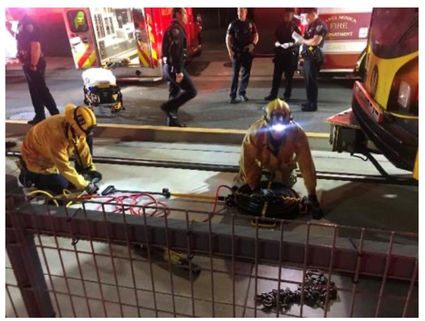 The pedestrian was extricated from underneath the train and transported to UCLA Westwood with life threatening injuries. Unfortunately, the pedestrian succumbed from his injuries at the hospital. The investigation was shut down for approximately four hours while the collision was investigated.

There were approximately 10 passengers on the train at the time of the collision. No other injuries were reported. The name of the deceased has not been released until next of kin has been notified.