The Iran Conundrum: Geopolitical Ramifications of the Middle East Situation

Being against ISIS does not make you a good guy. Exhibit 1: The Quds Force 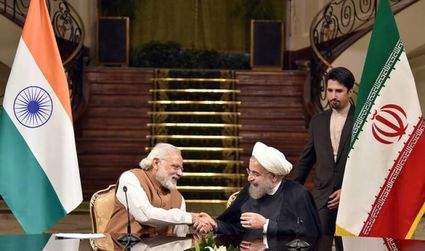 January 3rd saw the world go into a shock as Iranian Major General Qasem Soleimani, the grand architect of the Islamic Revolutionary Guards Corp (IRGC) or Quds force as it is also known, was assassinated in Iraq where he was a guest of the Iraqi government. Just another day in the Middle East, one might be tempted to say? Not the case, sadly. This assassination will prove to be more consequential than even possibly Osama Bin Laden's killing.

Even more interesting are the Geo-political ramifications of this event. How this affects allies of both Iran and the US will be intriguing to observe. It gives a whole new meaning to the phrase "Your Friend's enemy is not necessarily your enemy"!

One of the most crucial after effect will be on India. India is in a very precarious position where it happens to have great relations with both Iran and the USA. In fact, one of the great thorns in the US-India relationship is the stance that each has towards Iran and Pakistan. The US deems the Islamic state of Iran as public enemy number one and India gives that great glory to terror state Pakistan.

India has always enjoyed a special relationship with Iran. There are several main reasons for this. Firstly, it enjoys a civilizational connect with Iran, than goes back millennia. From people to people, arts, culture, language and even more importantly, government to government, there is an irrevocable bond there that will be hard to break. Secondly, India gets 80% of its energy needs met by Iran, 60% of which is crude oil, for an exceptional price. For a country of 1.3 Billion, this will be a hard thing to beat with no alternative in sight. So, if the US wants to pressure India on its close relationship with Iran that will be a move, which will prove fruitless. Thankfully, US Secretary of State, Mike Pompeo on several occasions has stressed that it is sensitive to India's energy needs as well as its concerns for national security as well as territorial integrity.

In a strange turn of events, India may be the only power in the world to mediate between Iran and the US if the need arises.

In the west, this seemed to have sparked a debate whether the general was a good actor or a bad one. Mr. Javad Zarif, the Foreign Minister of Iran was recently at the Raisina Dialogues, one of the world's leading foreign policy summits held in New Delhi, where he passionately defended his country. He called the US's actions either "ignorant arrogance" or "arrogant ignorance". Your pick. He stated, "The only two people celebrating the General's death are USA and ISIS". He claimed that the US just got rid of the most Anti- ISIS leader. This of course is a bit disingenuous when you look at the facts a little deeper.

As for the other countries in the Middle East, whether they broadcast it or not, there is a sense of relief that the US has pushed back on the rising power of Iran in the region. One of the biggest fault lines in the American discourse is in what the QUDS Force actually is, and who Qasem Soleimani actually was. According to Middle East experts have state extensively that the Quds force was designed for the purpose of extra-territorial operations such as building militias inside countries surrounding Iran, for the purpose of being stronger than the national armies of those countries, and hence answerable to Iran. It is like the CIA combined with Joint Special Operations Command (JSOC), with a larger than life Bollywood style character on top to lead it all. In some ways, this killing is more consequential than that of even Osama Bin Laden. Any argument that this killing was crossing a red line could be countered with the logic that the Red Lines in International law had been crossed by Iran for years, for undermining sovereignty of it's neighboring countries.

Foreign minister Zarif claims that the US just got rid of the greatest Anti- ISIS fighter. However, the Quds force has allegedly been known to kill US forces in Iraq, slaughtering people in Syria and infiltrating destabilizing technologies into Yemen. It is well known in Think Tank circles that the Quds force's role in destabilizing Iraq and encouraging sectarian politics created the conditions that actually cause Sunni disenfranchisement as well as partnering with the Syrian regime that ultimately led to the creation of ISIS or "Daesh" as there are also known. Experts in counter-terrorism would say that the Quds force was actually on the other side of the ledger on balance. It is a significant misreading of history. Being against ISIS does not make you a good guy, as this is exactly what bonfide terror groups such as Hamas and Hezbollah are.

It may be important to note that the UN Security Council had passed a resolution banning the travel of Soleimani outside of Iran, a resolution that was broken when he traveled to Iraq where he was assassinated.

Whatever may be the case, as much as the US would like to withdraw from the Middle East, this event proves to be like quicksand, where they get sucked right back in with little hope of getting out. The killing of the general was obviously met with Iranian retaliation by firing of the ballistic missiles and the shooting down of an airliner, just to send out a message of what it is capable of.

So is Diplomacy completely off the table? Middle east policy experts claim that the Iranians will work overtime to develop options for striking back at the US, so things are expected to be tense for a little while longer. The hope that we should have is that neither side wants a war and that there is a path for both parties to negotiate a new deal down the line and that common sense will prevail!

Another example of Trump making our country less safe with his fellow republican's blessings.