Sometimes golf just doesn't make sense. What else can you say about the third round at Riviera? 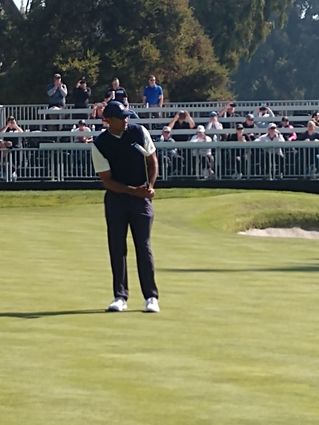 Tiger watches his eagle putt on the 17th hole. Disappointingly, the putt rolled off the green.

Tiger Woods came into the round after a year where he let the field know he was the still a force to be feared. He narrowly made the cut, but was in the place that struck fear into the tour for so many years: lurking. This year, the crouching Tiger threw up a four-putt from two feet on the 13th hole to finish with a 76 and end up 15 shots behind the lead.

In Tiger's usual spot just behind the leaders is Russ Henley, who shot a three-under 68 to place one shot out of the lead. Henley, like Riviera, defies expectations. In his career on the tour he has earned a reputation as a player who usually either misses the cut or wins the tournament. So far this season he has missed the last five cuts and earned small paychecks in four previous events, so it should be expected that he contends here.

Likewise, Adam Scott hasn't won on the PGA Tour in four years , so the fact he is tied for the lead after round three should be no surprise. The 39-year-old Australian has fought to maintain his game after the tour banned his beloved anchored putter, and seems to be gaining momentum, closing the third round with five birdies in this last twelve holes to finish at ten under par.

Tied with him is Matt Kuchar, who has led after every round, because why shouldn't he, at 41, throw down a marker for all the flat-bellied twenty-somethings to shoot at? The world's twentieth-ranked player is following up a strong two-win 2019 season with what looks like to be a solid start to 2020, so maybe it's not surprising that he shares the lead.

Neither is it shocking that world #1 player Rory McIlroy is that third member of that three-way tie. McIlroy has not finished outside of the top three in any of his starts on the PGA tour this season, and regained the #1 ranking this week despite not playing at Pebble Beach. Sure, he was more known the last several years for his broken engagement to tennis star Caroline Wozniacki and ensuing marriage to Erica Stoll, but married life seems to have suited McIlroy's game.

Sunday's final round may yet follow a reasonable script and restore order. However, there are still loose threads that need to be resolved. Dustin Johnson may have regained the form that made him #1 in the world, posting a four-under round that puts him two shots out of the lead. Bryson DeChambeau, golf's mad scientist, has crept up the leaderboard to 11th place, and has the game to pass the leaders. 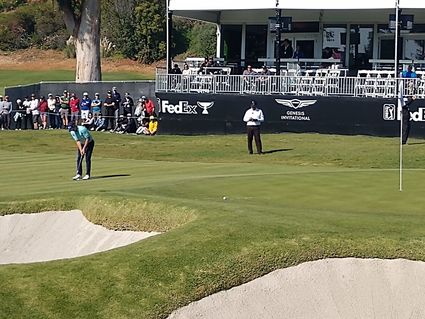 Tyler Gooch for eagle just off the green on the par 5 17th hole. Just missed on the low side.

Max Home, Talor Gooch, and Joel Dahmen are three unfamiliar names who recorded scores better than any of Saturday's leaders to put them in the top ten, tantalizingly close to an unexpected win and the $1.67 million top prize.

Joining Tiger in the "what happened?" group are former PGA champion Jason Dufner, tour mainstays Steve Stricker, Charles Howell III, Tony Finau, Rory Sabbatini, and defending champion J.B. Holmes. Each are out of contention, in the bottom ten of players who made the cut and at least eleven shots out of the lead.

The leader board would make just as much sense, and maybe more, if it were flipped around with those names chasing Tiger. Exactly that sort of topsy-turvy outlook is what makes Riviera the event it is. Tune in tomorrow to see who takes the top prize at yet another inexplicable Genesis Invitational.