Buttigieg, Steyer, Klobachar Out of 2020 Presidential Race in Close Succession

What did Biden Offer them? Were they forced out by the Dem Party Establishment? 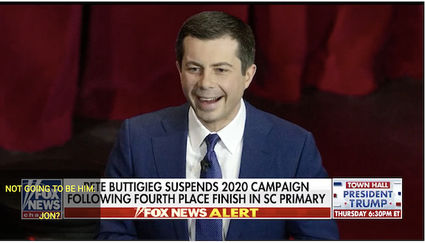 Pete Buttigieg drops out of US Presidential race. Was he offered the VP slot on a ticket with Biden?

South Bend Indiana Mayor Pete Buttigieg has suspended his presidential aspirations. He will announce tonight that he is dropping out of the race. He will deliver a speech on the importance of "Unity"

The "also ran" candidates such as Buttigieg are under tremendous pressure from the party establishment to head off a disastrous Bernie Sanders nomination, by coalescing around Sen. Joe Biden, 77. At just 38, Buttigieg has a tremendous political future at least potentially. His youth and the fact that he comes from a swing state, Indiana, means that he could even be offered the vice presidential slot on the national Democratic ticket.

With 26 Pledged delegates, Pete Buttigieg had half as many delegates as Joe Biden, and was ranked 4th overall in the Democratic Presidential primary. If he adds his delegates to Biden's 52, the two men together will have more than Democratic Socialist Bernie Sanders. With 62 delegates, Sanders leads the pack.

Millionaire far left candidate Tom Steyer retreated from the race on Saturday. Mayor Bloomberg, who has yet to appear on a ballot, is counting on a strong finish in California on Super Tuesday. He has spent an unprecedented $700 million on his campaign so far.

This from CBSNEWS.COM: With 94% of counties reporting as of Sunday morning, Biden won the support of 48% of voters, ahead of Bernie Sanders at 19% and Tom Steyer at 11%. Pete Buttigieg, Amy Klobuchar, Elizabeth Warren and Tulsi Gabbard are not on pace to win any delegates, according to CBS News projections.

After Biden's big lead became clear on Saturday, Steyer announced he was dropping out of the 2020 presidential race. Steyer had invested heavily in South Carolina.