Brit Star Jonny Labey Caught Singing In The Rain In A Torrential Downpour During Lamo Footwear Shoot In Santa Monica. 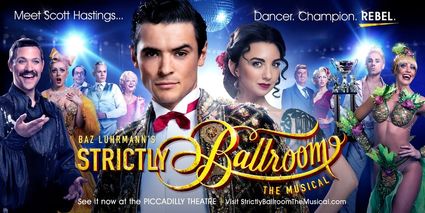 British triple threat actor, world class dancer and singer Jonny Labey was caught in an unusually bad down pour during a photo shoot for LAMO footwear, on what was one of California’s wettest days.

Labey was shooting the LAMO footwear photos with fellow Brit Hollywood A-List publicist Christine Peake on Santa Monica's Montana Avenue where he popped in to get a hair cut at Esquire Barber Shop - home to Santa Monica's favorite, Vic The Barber.

With his new shorn haircut, Labey was ready to shoot when the usually sunny Santa Monica skies turned black and the pouring rain threatened to end the shoot.

"This is nothing", laughed the British star. "This is just another day back home for me, we adjust to all kinds of weather, I love the rain! " Labey then grabbed an umbrella and burst into a rendition of 'Singing In The Rain', in front of crew members.

Lake Shrine, which reminded Labey of Jersey, the idyllic place he grew up in.

During his whirlwind three week visit to Los Angeles, Labey met up with Tony Award winning Broadway Producer Scott Mauro, took acting classes with A-list acting coach Iris Klein and met up with major players from Netflix and had a couple of hush hush meetings with Hollywood Producers.

Labey is only 27 years old but has accomplished a great deal in his young career, highlights include starring in #1 British TV series Eastenders and also starring in Baz Luhrmann's smash hit musical "Strictly Ballroom" which sold out in London's West End, garnering Labey outstanding reviews.

Labey has been dancing and singing since he can remember and spoke fondly of his Mother's hard work and how he appreciated all the driving back and forth to classes every day, family efforts and financial support both his parents had shown him to help him live his dream to be a performer, and the love and support he treasured from his two sisters.

"I know and appreciate how lucky I am", said Labey, "I will never take for granted the sacrifices both my parents made for me or the love and support I have from both my sisters, who can ask for more than that?"

And with that he danced away and jumped into a puddle laughing as he headed back to England.

Somehow I think he will be back very soon, dancing, acting, singing and always grinning- who can ask for more indeed?