Sunday night, the first case of Coronavirus was diagnosed in Riverside County. The media said the patient was being treated at the Eisenhower med center in Rancho Mirage.

However one local TV station reports that this person was actually at the Eisenhower medical center on Washington Blvd, in La Quinta." What's the difference? The subtle difference is that the illness apparently directly involved personnel at the BNP Tennis Open, now cancelled.

"This is literally across the street from the Indian Wells Tennis Garden. The authorities are refusing to say how this person got the virus or anything else important. They will only say that no schools are affected."

On Saturday several qualifying tennis rounds were played at the tennis garden, same day virus person checks into hospital. Then suddenly BNP Open was cancelled by authorities in Riverside county Sunday night at 6:45.

"I think, this is only my thought, that a player showed up sick, played a round of tennis, got even sicker and went across the street to the hospital and was diagnosed."

The BNP Tennis Tournament brings 470,000 visitors into the Coachella valley every year. It is an important part of the local economy. 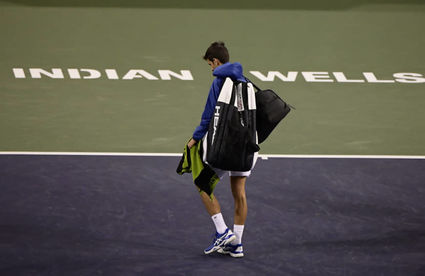 The tournament is a Masters 1000 event on the men's tour and is a Premier Mandatory event on the women's tour. Between 1974 and 1976 it was non-tour event and between 1977 and 1986 it was a secondary tournament of the Grand Prix Tennis Tour but in 1987 it was upgraded to be part of the Grand Prix Super Series, the series of nine tournaments just below the four majors and the year-end finals in importance. It took the place of the Philadelphia Indoor event as the first Super Series event of the year. The event is one of two tour events (along with the Miami Open), other than the Majors, in which main draw play extends beyond eight days. The women's main draw usually starts on Wednesday and the men's main draw starts on Thursday. Both finals are held on Sunday of the following week. Both singles main draws include 96 players in a 128-player grid, with the 32 seeded players getting a bye (a free pass) to the second round.

The tournament is played on hardcourt and is the best-attended tennis tournament outside the four Grand Slam tournaments. It has the second-largest permanent tennis stadium in the world (the Arthur Ashe Stadium being the largest).