All of Italy Now a "Red Zone," Quarantined Due to Coronavirus. What is life there really like?

"Italy is now the nation with most contagion after China and apparently we are going to get financial aid from China." 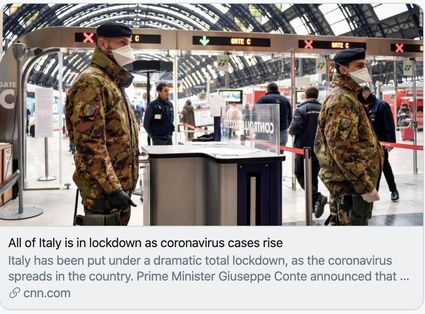 All of Italy is now in Lockdown due to the Coronavirus.

Update: all of Italy has now been declared a red zone, under quarantine due to the novel coronavirus. No public transportation, no going out at night, no work or school except from home. This from our source in Italy:

Hi how are you? I am okay. It has been crazy here in Italy and Europe is starting to have lots of problems too, due to this outbreak.

After a hammering and alarming Italian mass media cover that had its peak two weeks ago followed by a hysteria outbreak, (where people assaulted grocery stores like we were gonna get a tornado or something) we are now forced not to leave the region and invited to stay inside the house as much as possible.

A person I know got her building apartment on quarantine she and her family and no one in the building can leave. They will be forced there for two weeks. I live in a high density population part of town, buildings are tall and big here, an entire apartment building has been shut down right in my neighborhood for two cases in the whole building.

I am also quite concerned about the 30.000 highly armed US soldiers that landed in Europe on March the 5th and are now stationed near the Russian border in what they call a military practice. Do you know anything about this?

Just two days later they enforced the Lombardy/some Veneto and Emilia Romagna shut down and a couple more areas, now I don't think that is a coincidence. These regions are not only the most highly populated areas in Italy but also the wealthiest ones and the most hit by the virus outbreak, possibly because of these two factors.

I am now taking the mandatory shut down particularly seriously, especially because of this "coincidence" of the US army practice and presence. Many people are taking this as a vacation and occasion to go around for parties, gets together, seasides and ski resources because Italians don't know how to obey rules. It is possible that people will keep just doing as nothing happened and all this emergency will fade away, it won't create fear nor news anymore and it will die off.

Italy is now the nation with most contagion after China and apparently we are going to get financial aid from China.

16 million is about the number of people that lives in the most populated northern Italian region. Lockdowns are mostly concentrated between all the city in lockdown and Milan particularly. it is crowded, very active, productive and wealthy, therefor many industries, factories, etc. I am right in the middle of it.

Italian Health system used to be excellent, but after 20 years of Berlusconi and many cuts to public health, the hospitals lack of the proper equipment nor bed room for an emergency such as this. It is not the virus its self, it is the lack of proper resources. That is what they are telling us and that is probably what's true.

I have lived the decadence of a once wonderful health system for the past seven years and it is has become a very poor service, though in the northern part of Italy it is still pretty decent. At this moment they are also saying they will cure only those who have more chances to live, in other words if you are sick and old and there's someone younger than you in line just go home they will not take you.

I am just staying in, going out for groceries and to walk Snoopy (my dog). I will try to concentrate on my artwork and stay positive. I am at a good point with my comic book I have had some problems with research, but finally got at a turning point. I miss my classes so very much, I will ask the teacher if we can do live streaming from home.

Do not take things lightly, my friends. This is a huge deal whatever the reason may be we don't know, but here things are insane. We are under a huge emergency, it is very difficult to live days like this and be a prisoner in your own home. 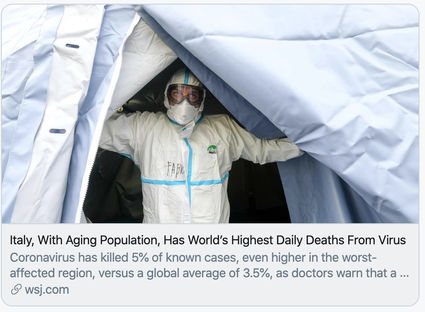 All of Italy is now in Lockdown due to the Coronavirus.

It is surreal especially for societies such as our Europe US we are born in a privileged time and place and have no clue what this is all about. Start taking precautions because when it will hit the US and it will hit hard. Trust me my friend up until two weeks ago this was someone else's problem now is our. And in the US, health care is not even free. Take care, my dear. I will keep you updated as much as possible

What do you think about all this? Thanks for reading my long email. This is it from the front!! Your concerned friend,

Italy will expand the lockdown of the Lombardy region to the entire country, Prime Minister Giuseppe Conte said Monday 3/9/20. People throughout the country should not leave their homes other than for work or emergencies, Conte said. He added that all public gatherings will be banned and sporting events suspended.