Why is the economy collapsing? Because we're stuck in our homes for at least 8 weeks, that's why. 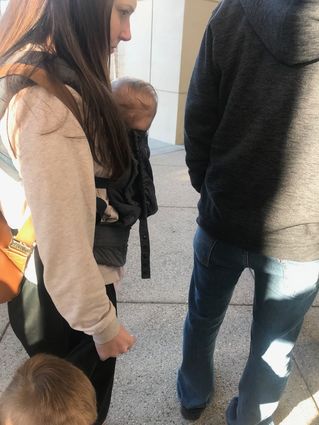 A mother worried about her baby As she walks into an LA County Courthouse last week.

The worldwide attempt to control the recent worldwide pandemic of COVID-19 is an overreaction and a "fiasco in the making.” Scientist John Ioannidis.

In most of the disaster movies we grew up with (think Jaws, for example), the town's politicians ignore the warnings from a scientist that the end is nigh. Making the disaster much worse. It may be politically incorrect. But before we return to the stone age, we need to consider the possibility that the emperor has no clothes.

Some doctors are now saying the Coronavirus pandemic is the reverse actually. An overreaction to a new disease, which is not even all that new. What if the cure (total economic shutdown) causes more harm than the disease?

After all, the common cold is a coronavirus. Influenza and cold develop into pneumonia every year in the US, causing elderly and those with immuno-supressive conditions to suffer and even to die.

This virus is not impacting the young or even the middle aged very much. The death rate is a bit higher than for most annual influenza's. But for every diagnosed case, there are 3 or 4 that are not diagnosed (because the patient is not very ill).

Therefore, the death statistics are far lower than the 3.4% reported out of China.

Italy, which has the worst national problem with the virus, has 150,000 resident Chinese workers. They also have the highest elderly percentage in Europe (23.5% of the Italian population is over 65). Hence, you would expect them to have quite a problem.

So why is the stock market down 2997 points on the Dow today, Monday 3/16? Because we're stuck in our homes for at least 8 weeks, that's why. Restaurants and bars are closed, grocery stores are running out of (a few) highly desired items. In California the Courts are closed, and everyone is running to the ER when they so much as hear someone else sneeze. The world and national air transportation system has ground to a halt.

Let me give you the opposite case, just so you know that I've considered it:

Coronavirus is a shielded virus, meaning it is better protected against the immune system than other viruses.

This particular coronavirus can spread fast - it was first reported Dec 31 and more than 800 confirmed cases occurred within 3 weeks. The initial cluster of individuals infected at the market where it originated numbered 41 and it has spread to 9 other countries in a short period of time 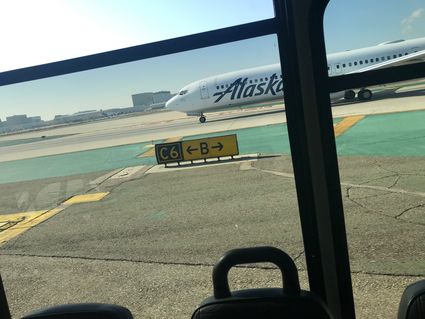 An Alaska Airlines jet at LAX. The world and national air transportation system has ground to a halt.

This coronavirus is a new type, meaning we don't have a lot of information to go on, but it does show some similarity to SARS which had a fatality rate of near 10%, so thinking this one might also have a high fatality rate is not unreasonable

There is no cure and no treatment specific to the virus

All of these items, frankly, have been seen before. What if the politicians are overreacting because they may lose their jobs if they under-react?

Even Dr. Anthony Faucci corrected Pres. Trump at a press conference today, when Trump said that we could be shut at home until August. Dr. Faucci denied that would be the case.

This is not bubonic plague or leprosy. Perhaps we should put a date on it, say April 1, 2020, and go back to situation normal. Declare an end to the "national health emergency." That is, if we're all still here. Which we probably will be.

This article looks more and more ridiculous everyday. I see you guys have no shame.

Still think this is one big overaction, Sam? What an irresponsible and inaccurate article.

Our current president only cares about what others think of him and has convinced his low information followers that this serious and deadly pandemic is no big deal. Trump's irresponsible and innaccurate comments are costing lives everyday.

Real journalists do not write, like um guys, because they don't have a real opinion.....who the f really trusts the media nowadays?!?!? - Trust some blonde babe and some tanned bloke on fox news over real science......back to Italy, aging population, high number of smokers, low humidity, high population density in North Italy……Like um Guys? India, 1 Billion people......high humidity - how many cases? - like, Um Guys,.....get a humidifier, do social distancing get this below R1 and worry about your own narrow views.

Yep, massive over reaction, any one with half a brain cell knows this will subside in summer in the Northern Hemisphere - airborne viruses like this do not spread when humidity is above c40% = that is fact - research it, no reason/evidence that COVID-19 will be different......household heating (for everyone) but particularly sad in care homes in winter months dries out the air and allows viruses (every single kind) stay in the air and infect more people. Trump even knows it - media is making everyone panic.....WHO should be disbanded due to not true facts and trying to make themselves a political power (that is more likely to be the truth) - for all those who say that Australia has it and it is summer - of course they have, global travel means that every country will have it - does it spread more than R1 in Australia - anyone know? where are the facts? but if you want to believe the media over scientists then fine.

Maryland Gov. Larry Hogan (R), chairman of the National Governors Association, said leaders nationwide are scrambling to secure ventilators to prepare hospitals for a surge of coronavirus patients, but there are not enough available.“There is a problem with supplies and ventilators,” Hogan said Monday. “There’s not enough supplies. The states don’t have enough. The federal government doesn’t have enough. They’re not getting distributed fast enough. And that’s a problem for all of us.”

It never fails. The same conservatives that screamed bloody murder about President Obama's ultimately successful Ebola response, now want everyone to chill as this deadly pandemic spreads across the country. Trump initially mocked the virus as a political trick being used against him. History will destroy this inept administration.