Senior Hour at Costco: I Almost Got Hit Over the Head With a Walker, While Police Watched

Costco senior hours or as I refer to it Senior smack-down! #CostcoPanicBuying #Coronavirus 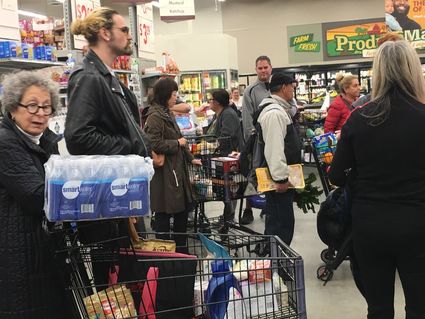 Costco senior hours or as I refer to it Senior smack-down!

Today was the first day for the senior hours at Costco, and boy did it get crazy. Knowing that it would most likely be chaotic I called the day before and asked where the senior line would start. The person I spoke with told me that seniors would be lining up at the refund door and there would be a separate area for the General line.

When I arrived at 6:45 this morning the general line was already around the store, yet no one was in the designated senior line. I grabbed a cart and headed for the refund door expecting to see a sign, there was none, I was the first person in line, shortly after my arrival another person showed up. She informed me that she had called the day before and was also told the refund door would be the start of the line. Chatty Cathy behind me shouted out to the ones in the general line that they were in the wrong place and proceeded to inform them of the rules, they argued otherwise. Thus began the battle of the lines.

A couple of young men came out to rearrange the shopping carts and were hence inducted in to the war of the lines. They also informed the people in the general line that the Senior line began at the refund door. This caused quite a ruckus and one enraged older man began to pound loudly on the entry lift gate, to no avail, as others yelled at the workers that they had been told their line was the senior line.

At 7:00 am the refund door opened and I was cheerfully greeted by a young man (Tom) I knew from my many prior visits to the location. He needed to bring out the electric carts for the members and asked us all, (now a dozen or so) to move to the side a bit so that he could bring out the carts. Now the battle really got underway. They told him they were first and in the correct line, he kindly told them otherwise and proceeded to move the line of general seniors behind the one at the refund door. Four enraged "people" ran to the front of the refund door line and shoved their way in. One brazen woman claiming that she had been there from 4:40 in the morning and she was going to get in the store first. She social distanced herself right behind me breathing down my neck. I asked her to please move back and in her loud New York accent she told me to move, that she was here first and was getting into the store first. Tom (not his real name) told her it didn't matter that we were all getting into the store at the same time, she was furious. She was here to get four things and no one was going to get them first, it was the principal of the thing.

Now let me stop here and ask, Ms. NY what are you so angry about? Why do you need to be first? There are no trophies that are being given out to the first person to reach the Toilet paper and water, calm the F. down.

It got crazy outside, people arguing that they were told to get in the wrong line. The senior line being caped and everyone being sent to the general line, then back to the Senior line only to be told it was caped. People yelling at the store employees, waving their hands and issuing boomer threats of "let me speak to your manager!" Then the police showed up, and three young men in riot gear parked their vehicle and got out to keep the peace. I would like to say everyone calmed down, but I can't. The melee continued with the 60 plus members spouting about their entitlements and how they had been cheated. It is at this moment I can say that I was ashamed of my generation and their bad behavior, its no wonder the younger generation is annoyed with us. 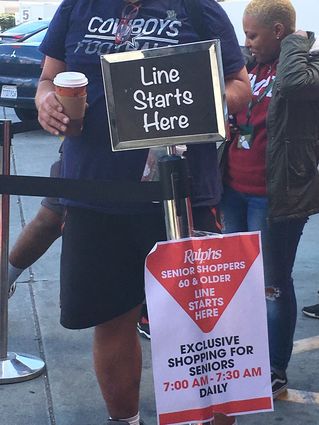 Finally it hit 8 am and the door opened to let us all in. ID's were out as we were carded to insure we were of age (its been a long time since that happened) and our pathway was laid out before us. We followed the yellow brick road first coming upon the TP and those that wanted a 30 pack received one. I have to say that I was pretty well set as far as TP is concerned, but there is no way I am ever doing this again, so I took one, yes I know and I am sorry, however you get caught up in the frenzy. Next stop water and everyone was allowed ONE case only, then the line moved us on to dairy where we could have one pack of eggs and one milk. Now this is Costco so one pack of eggs is two dozen eggs and milk is sold in two gallon boxes. After the dairy stop you were let loose in the store yippee! I shopped around for a few things I needed and a few I did not, (as I said not doing this again). Many items were limited to one and there were cases of water packed in every aisle of the store. The employees told me that in the afternoon it does get quiet, however items like eggs run out by noon, something to keep in mind. By the time I left the store it was 9 and as I left I noticed that the senior line was empty and many of the ones in the general line had entered the store as well.

Breathing a sigh of relief I loaded my items into my car, vowing that until this madness ends I am not coming back.