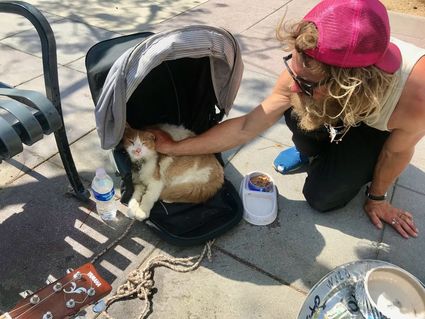 Rex and his cat, who's name is also Rex, playing guitar on the Santa Monica promenade, April 1, 2020.

Homeless people and their health has been a major concern during the Coronavirus pandemic, in part because of their potential impact on the broader community. 13th Bridge Home Shelter will open at the VA. "Today 140 new beds will be available in three new recreation centers. That takes our total to 700 new beds," Garcetti said. 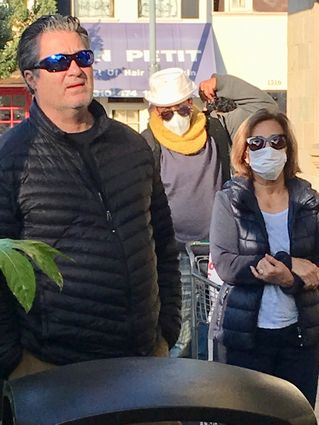 People waiting to enter a Ralph's market in Westwood.

The Armory on Federal Avenue in West LA has periodically been used as a winter homeless shelter for years. Nine YMCA's will be open for showers and bathrooms for homeless.

Dozens of new porta-potties were added to Skid Row. The city has signed 11 leases, adding 780 new hotel rooms for homeless that need to be isolated.

Longtime philanthropists Eli and Edith Broad donated $500-thousand to the Mayor's Fund and the Angeleno Fund. This campaign will start handing out gift cards with funds for food and cash for homeless people. And 150,000 N 95 masks were donated by a digital streaming company.

Can the LA Clippers open their facility to the homeless? Restrooms, showers, kitchens, already there. Keep the staff working.