Let's Open Businesses on May 1 Instead of May 15, Governor Newsom

A Lesson in Calculus: We should not have to wait until May 15. We've already waited too long. 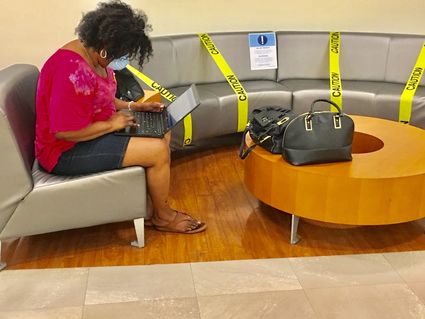 Lobby of a Kaiser hospital in West LA. Hospitals have few patients, since routine surgeries have been suspended. Medical workers are being furloughed.

On March 16, the City of Santa Monica, the County of Los Angeles and the State of California almost simultaneously began shutting down businesses, beginning with bars and gyms. Within days, both local and state authorities had shut down all but "essential" businesses. The length this lockdown was supposed to last was extended several times until the current deadline of May 15.

Ostensibly, the reason for shutting down nearly all economic activity was to allow hospitals to ramp up ICU beds, ventilators, and other necessary equipment so they could handle the expected onslaught of COVID-19 cases. The public was told repeatedly the importance of "flattening the curve."

The curves that have been shown repeatedly to the public are two images: one of a sharp spike up and then down. This would be the infection rate if no lockdown or social distancing measures had been taken. A large number of people would very quickly contract COVID-19 - so many people, in fact, that there would be just as quick a spike in a decrease of new cases. Contrasted with that was a graph that has been misleadingly truncated. Purported to show the infection number when social distancing and lockdowns are instituted, this graph shows a curve that does not spike nearly as high and has a shallower slope. The graph is truncated, however. What actually happens is that shallow slope extends on and on as it simply takes longer for THE EXACT SAME NUMBER OF PEOPLE to become infected. (The number of infected is the area under the curve. The area under both curves is the same.) That number of people under the curve must become infected before herd immunity is reached, and the virus has nobody left to attack.

The lockdown orders were never intended to reduce the number of deaths. These measures cannot and will not do that. They were only intended to slow down the rate of infection.

Now that the hospitals have been primed to accept a large number of COVID-19 patients, there is no longer a reason for lockdown orders or the continued decimation of businesses. Yes, people will get sick once businesses open up again. Yes, some of those people will get very sick and even die.

But the hard truth is that until this virus dies out on its own or is knocked out by an effective vaccine, people will continue to get infected, get sick, and some of them will die. This fact will not change if businesses continue to be forced closed. ONLY THE RATE OF INFECTION WILL CHANGE.

3.4 million Californians who were gainfully employed two months ago are now without work. Unemployment applications are backed up at the governmental offices charged with processing them. Some of these people are without sufficient funds to provide themselves with such basic necessities as food and shelter. Poor people cannot afford the amenities needed to prevent or care for serious illnesses. They can't afford healthy food (far more expensive than unhealthy food), time for exercise, or to pay for health care.

That's right, health care. Please do not imagine that government-supplied health care will provide for all of these unemployed citizens. Please. It is already heavily rationed, delayed, and inadequate. With such a high new demand, the rationing and delay will only expand exponentially. And no, emergency rooms will not conduct mammograms or chemotherapy. They can not do many necessary tasks for keeping sick people alive. 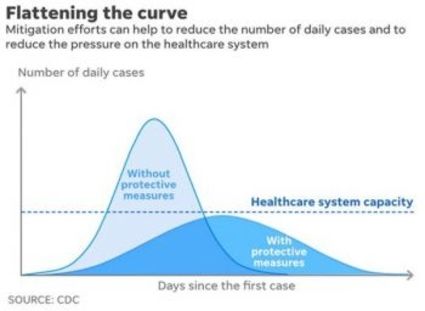 Flattening the Curve: Mitigation can help reduce the number of daily cases and the load on the medical system.

If the current lockdown situation continues, people will die. They undoubtedly already are dying. The numbers of these deaths, however, will not be tabulated daily on highly-promoted official websites. No high-ranking government official or bureaucratic medical expert will be charged with their decease. But these deaths will and are happening nonetheless.

The virus kills people indiscriminately. But at least nobody voted the virus into office. The virus owes California citizens no loyalty or accountability.

But the governor of this state, the leaders of our local governments, and the bureaucratic medical experts advising them do owe us all of that. And they must stop killing more people than is necessary. They must allow California to go back to work, earn their livelihoods, and regain the capacity to take care of themselves.

We should not have to wait until May 15. We've already waited too long.