By Michael Greer
Special to the Observer

Democrat Leaders Decide Who Are "Essential" Based on Who Votes Democratic 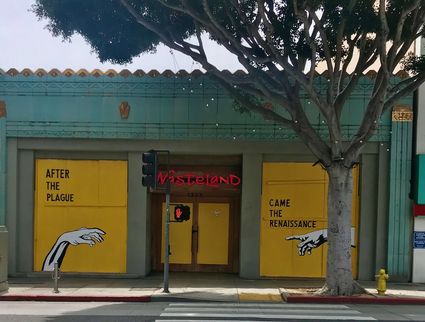 A boarded up business in Downtown Santa Monica.

I'd rather die on my feet, then live on my knees.

I've become very disheartened. The Leftist media has successfully convinced a significant number of people that it is necessary for us to be isolated for an indefinite period of time and now that the Left has gotten us locked down, they don't want to let us out. This is a perfect opportunity for them to finish Agenda 21's goals. The globalists dreams are coming true.

First it was two weeks, which we all thought was reasonable because the incubation period is 14 days. We were willing. But then it was a month, then two months, then they talked about six months or until there was a vaccine (which could be never). They talk about a "new normal". Never shake hands again, maybe no sporting events with an audience, continued social distancing, maybe wearing masks indefinitely. Why? I don't want their "new normal".

The Left has demonstrated just how tyrannical they are capable of being. Los Angeles Mayor Garcetti saying he'll "hunt down" the noncompliant people. He's filling skate parks with sand, mandating people wear masks (after being told a month ago masks don't help), extending the lock down when fewer are getting sick. A young man arrested for sail boarding alone in the ocean. People ticketed for watching the sunset in their cars. In other states with Democrat Governors, Moms and Dads are arrested for taking their kids to an empty park, worshipers fined for listening to Easter services in their cars, while Mosques are still open.

State Governors and Mayors deciding for us what businesses are "essential". Interestingly, most government union jobs are considered essential and those employees are still being paid even though they are shut in their homes not working. Most of these workers are Democrats and are just fine having the lock down extended because they can still pay their mortgages and bills. Teachers come to mind. Why should we still be paying them when our schools are closed? But small businesses are closed and their incomes are stopped. They can't pay their bills. I read that one third of New Yorkers couldn't pay this months rent.

What I find most alarming is the media. Liberals always dismiss Fox as being unreliable and I always wonder why they think the other media sources are reliable. Fox has never edited audio or video to discredit someone, or used video from an Italian hospital saying it was an American hospital as CBS did, or used forged documents as Dan Rather did on 60 Minutes, or as CNN did recently with pictures of crowded beaches. Or not reported on an obvious news event because it hurt their narrative. Don't get me started on the difference between how Christine Blasey-Ford and Tara Reade are being covered. I speak to Liberals all the time who have never heard of an news event because only Conservative news reported on it and they refuse to listen to Conservative media. We're not talking about opinion, we're talking about verifiable news.

At President Trump's press briefings the media isn't there to learn about what is being done, new discoveries, expanded testing, new studies, encouraging developments, they are there to find some way to make Teump look bad. The dishonesty of the media has never been so blatant. While they called the ban on travel from China unnecessary and xenophobic, they now say Trump didn't act fast enough. When Trump banned travel, China, the World Health Organization, the CDC and the media were saying the virus couldn't be passed human to human and wasn't airborne. Dr. Fauci, head of then CDC the last 30 years, said on February 17th the danger was minuscule and to go to the Super Bowl, and on March 9th, there was nothing to worry about and no reason for healthy people not to go on cruises. On February 5th, New York Health Commissioner, Dr. Osiris Bardot, said not to change plans due to misinformation about the Coronavirus. And EVERY liberal talking head said this was no worse than the regular flu.

Not a single World Leader was expressing concern over the virus either, but with the WHO, the CDC, other World Leaders, the media, etc. expressing no concern, with Trump being in the middle of an unfair impeachment, he went against the prevailing opinion and imposed the travel ban on China and put together a task force to look into it. The media condemned the task force saying it was nothing but "old, White men", pretending Dr. Birx and Seema Velma, Surgeon General, Jerome Adams (who happens to be Black), and Ben Carson weren't there.

Trump was criticized for the tests not being available. That was the CDC's job and the tests were contaminated so new ones needed to be manufactured. The CDC didn't want private companies to make the tests and that slowed down production. The CDC also had strict regulations on who could be tested. Trump eliminated the regulations and opened up production to private companies, but the media doesn't tell you that. They just keep blaming him for there not being millions of tests available this minute.

Trump is a problem solver, when he sees an obstacle to getting something done, he gets rid of it. But Trump isn't a mind reader, he couldn't know Cuomo was advised to buy several thousand ventilators but decided to spend the money on other priorities (perhaps to provide healthcare to illegal aliens) instead. But when he does learn of it, he finds a way to fix it.

New York and Los Angeles Governors complained that their hospitals would be overwhelmed so Trump sent hospital ships to each city in record time (While Rachel Maddow was saying he'd never get them there for weeks. Did she admit she was wrong and apologize? NO!). Trump had the Javits Center turned into a hospital, also in record time. He called together CEO's of Corporations to see how they could help. He holds conference calls with Governors to see what they need. Both Governors Newsom and Cuomo, who are not exactly fans of his, have publicly admitted that he has gotten on the phone with them right away and been very receptive. They said he got them everything they asked for....and quickly. But he still gets NO credit for anything. I keep tweeting the media telling them it is statistically impossible for Trump to be wrong 100% of the time.

Since China destroyed evidence, and the doctor who tried to warn of the virus died of it, we have no evidence to prove if the virus was accidentally released or on purpose, however, what IS clear is that once the virus was out, China purposely released it on the world. They stopped travel from Wuhan to the rest of China but DID NOT stop travel to other parts of the world, especially America. What is also clear, is that it didn't come from the "wet market" in Wuhan. It didn't come from eating bats. The Wuhan "wet market" sells seafood. It doesn't, and never has, sold bats. But the Wuhan lab WAS testing on bats. They were testing species to species transmission. Why does the media pretend it is impossible for the virus to have escaped the lab? Especially, when a few years ago Americans visiting the lab expressed concern at their lax safety measures? But instead the media has no curiosity about who patient #1 was, or why China shut down travel to the rest of China but not the rest of the world. They simply repeat China's propaganda.

From the day Trump took office he warned of how unfair our trade agreements with China have been. This virus has proven just how right he was. It has exposed how our representatives have been sending most of our manufacturing to China. Putting this country in a precarious position by having 90% of our drugs and medical supplies coming from a country that wants to dominate us. They have been letting China buy up companies here in America. And they have been enriching themselves In the process. 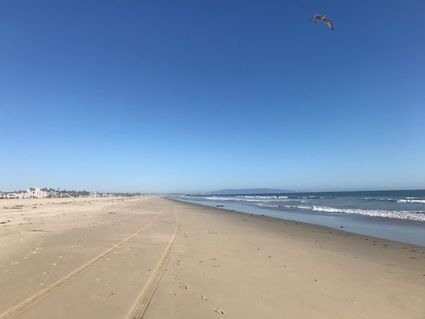 A bird flies over a completely empty LA County beach

At the same time we have social platforms censoring anyone who disagrees with WHO, Fauci or the lock down. Yesterday, as ER doctors, Dan Erickson and Artin Massihi, were being interviewed on Laura Ingraham's show, YouTube took down their video's. There was nothing in those videos that wasn't true. These doctors are more qualified to speak than any the Liberal media trots out. No one proved anything they said was incorrect, they just didn't want it heard because the Left WANTS to keep us locked down. Why aren't Republicans pushing to change the status of social media from platforms to editors? Liberals aren't being censored. Liberals used to be big defenders of free speech. No more.

What this virus has shown is that descent of ANY kind is no longer tolerated. Look how the Left is treating Georgia Rep. Vernon Jones and Michigan Rep. Karen Whitsett. This is a time we need MORE informed debate, not less.

When liquor and Pot stores are "essential", but churches aren't, when you can go to a grocery store or Home Depot, but not vote in person, when you can sit on the sand but not in a beach chair, this isn't about "science", it's about POWER!

I've spoken for years about Agenda 21 because I believed if people knew about it they'd stop it. Now that they have most of the world locked down, I'm not so sure we can.

For me the scariest action being taken under the guise of public health is Whole Foods new policy of trying to stop all cash payments for food. Jeff Besos, who owns Amazon, is behind this. He wants a cashless society so that every transaction every person makes is catalogued. If people can't pay cash for food they can't hide people in their homes from COVID 19 quarantine camps (such as the one on the corner of Lincoln and Ocean Park Blvd. in Santa Monica). At Whole Foods in Venice yesterday, I was forced to line up to check out with the cashier. Then I was directed to a cashier by a figure in authority. He said it was his job not to direct anyone to a cashier who might be having a problem with a customer who had a credit card that had stopped working. So-- no cash, no credit card and no checks in the new world order. I then came home and found out my $60.000.00 Wells Fargo Certificate of Deposit has disappeared and Wells Fargo's personnel can't tell me why.