Better download the app and order before you stand in line, and remember to socially distance while doing so. 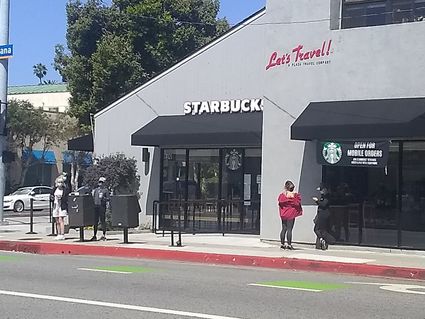 Starbucks store located at 700 Montana Avenue in Santa Monica has re-opened for business, as the line in front indicates. 5/2/2020

Starbucks Coffee Company has begun to re open stores in Santa Monica. Our photographer took photos of a line forming outside the Starbucks store on 7th Street and Montana Avenue.

This particular Starbucks store has a sign in front indicating that it is currently only taking mobile orders. So don't walk in and expect to look at the pastries and make up your line while standing in line, K? Oh and remember to socially distance while waiting in line.

Newsweek.com reports that Starbucks has begun to open branches in the U.S. Nearly half of Starbucks stores have been closed following the COVID-19 outbreak, will begin reopening from Monday with restrictions. The selected locations will be offering expanded pick-up, drive-thru and delivery order options, the company confirmed in an updated statement.

Thirty stores reopening from next week will not be offering in-store seating, while the company considers local government restrictions and infection curves as it reopens branches, the company's chief operating officer, Roz Brewer, told the Associated Press (AP).

The Seattle-based coffee chain is planning to reopen nearly 90 percent of its 8,000 U.S. stores with modifications by early June, while more than 98 percent of its stores in China, where the virus was first reported, have already been reopened, the AP reported.