What would happen if an Octopus took an Uber, and didn't like the Music on the Radio? 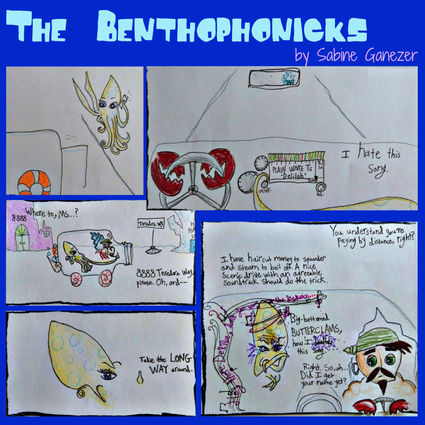 Delilah Demilo is a frustrated songwriter, a college dropout, and a venemous blue-ringed octopus. In The Benthophonicks, my debut comic, she sets off on a journey to find herself as an artist, but ends up finding a bunch of randos on the way – randos who turn into unwanted bandmates... who ruin her plans... and turn into true friends!

In last week's installment, Xander the Jewish Christmas Tree Worm refused the bald octopus's request for a pixie cut and received an ominous comeback: he can't play his trumpet in Delilah's (alleged) trend-shattering new rock band. That night he will lie awake, haunted by the thought that he let a customer walk out of his hair salon with split ends. 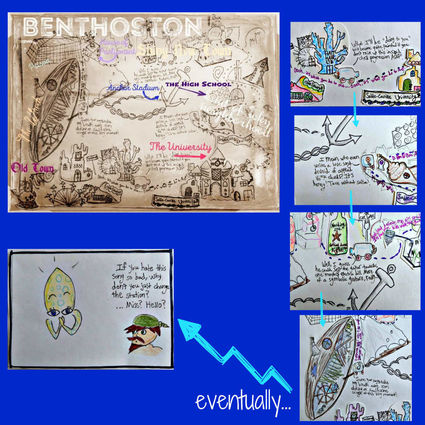 Meanwhile, Delilah needs a ride home from the hair salon, so she uses a rideshare app to book one with Cash, a hermit crab on the road to mend his thuggish ways (maybe.) This is where our story begins today...

I'm Sabine Ganezer, a frustrated songwriter-or-maybe-cartoonist and recent graduate of Linfield College (now Linfield University.) All the panels in this comic were hand-drawn and colored by me (and lettered, sorry to the handwriting buffs out there) before being digitally layered and embellished in Ribbet's photo editing service. I chose the title based on the Greek root benthos, which refers to the set of animals living on the ocean floor, as opposed to the pelagos, or open water.