The events of last night were due to a handful of bad actors, who may or may not even live in Minnesota. 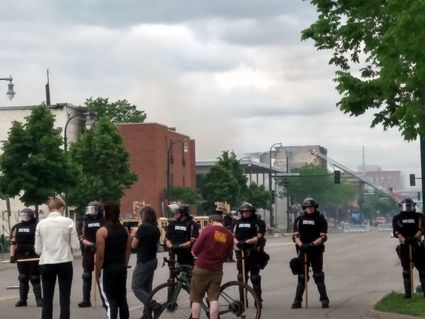 A line of Minnesota State Troopers keep people from getting too close to burned out buildings.

Minneapolis, 5/29: As volunteers cleared debris and helped board up burned out buildings in South Minneapolis, Minnesota Gov. Walz announced that the police officer at the center of the George Floyd investigation has been taken into custody for Floyd's murder.

I walked down to Lake Street this morning. Volunteers were arriving to help clean up. 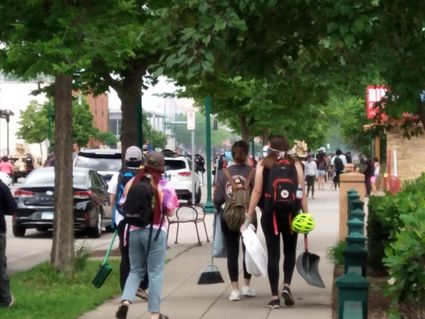 "I walked down to Lake Street this morning. Volunteers we're arriving to help clean up."

One of the big questions is whether or not Mayor Frey allowed buildings to be burned. "So did the leaders of Minneapolis let this happen? Who runs the police dept? Who is the governor. Who is the state AG? We know. Protestors were unarmed yet police stood down and left knowing they would burn the area down. Then when Trump said get it under control or I will, ta da," wrote one man on Twitter.

Liberals are also against burning down buildings, whether public or private. The events of last night were due to a handful of bad actors, who may or may not even live in Minnesota. That's my take on it, anyway.

CNN's take: "The ex-Minneapolis police officer seen in a video with his knee on George Floyd’s neck before the unarmed black man died this week has been taken into custody by state authorities, according to the commissioner of the Minnesota Department of Public Safety."