Police ask the Public to stay out of downtown Santa Monica, as they hold the line against looters 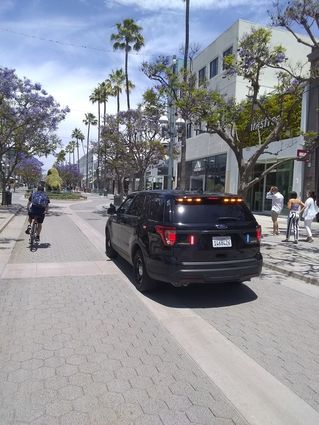 Santa Monica Police waiting for what might come, at the third Street promenade Sunday afternoon

Mayor Pro Tempore Terry O’Day told KTLA that businesses should board up their windows given the damage already left so far. “I’m not sure how the rest of the evening is going to go,” O’Day told KTLA. “Hopefully, we can get this place cleared out," referring to Santa Monica Place.

On Wilshire Blvd, looters broke into Big 5 Sporting Goods, again using George Floyd protestors to run cover for them. They have faith that the Police will not shoot them, and so far casualties among looters are reportedly zero.

In the City of Los Angeles, National Guard tanks have been deployed to the area around the Grove, looted last night. The County of LA announced a 6 pm curfew.

SMPD Holding the line so far. Police all have canisters, and the "protestors" have cameras, all hoping to catch the police doing something awful, said one resident.

SM Alert - Police Activity All I-10 and PCH off-ramps into Santa Monica now closed through CHP. 4 p.m. curfew in place. Stay out of downtown.

Update: The Vans Store was looted at about 1:40 pm. Tweet from the SMPD 1:45 PM: Santa Monica - Police Activity - #2 Please stay away from the Downtown and civic center area.

Despite rumors that a demonstration Sunday on Ocean Avenue would be followed by the looting and rioting (which has been the pattern across the United States); nothing much was going on at Santa Monica 3rd Street promenade as of 12:15 PM. 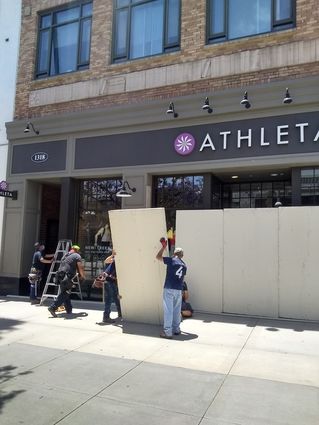 Workmen boarding up stores Sunday on the Third Street Promenade.

There was a heavy police presence consisting of police vehicles and private security guards. Workmen were boarding up a handful of stores. Other restaurants and shops seem to be open within the Covid-19 limits, even serving patrons.

There were Santa Monica Ambassadors and security guards watching a few people from the community. There were also news helicopters circling overhead and a few bystanders asked us if we knew what was going on.

There were a few suspicious looking people standing around. You can pretty much always say that about Santa Monica's Third Street Promenade. But despite rumors, protest remains peaceful