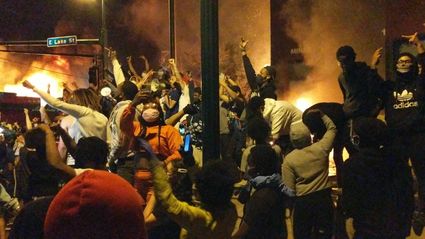 Julio Rosas shot this photo of rioters and looters "posing for photos" in front of the burning Third Precinct station. 5/28/20

Angry at the police, protestors have set fire to the Third Precinct Police Station just before 11 pm local time in Minneapolis, MN. In life he was a security guard, and his surviving girlfriend begged people not to commit crimes in his name. But the police station is reportedly on fire Thursday night.

Minnesota Governor calls in the National Guard. 500 troops are heading to Minneapolis-St. Paul, as local authorities completely lose control over South Minneapolis. The City of Minneapolis tweeted that protestors should retreat, as gas lines in the third precinct have been severed.

"@realDonaldTrump Help our city of Minneapolis is on fire for 48 hours now. No one know where this Ilhan Omar is no response We have a police chief this is so far over his head it is embarrising Target has closed it doors in all stores after mpls store was looted all night" tweeted steve miller. 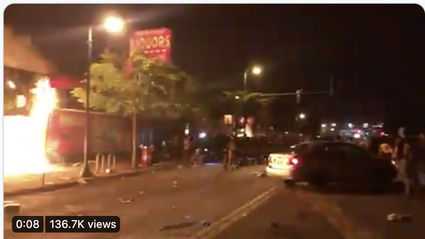 Gas lines have been severed and rioters are setting off fireworks. 5/28/20

#MinneapolisPolice ABANDON PRECINCT BEFORE PROTESTERS SET IT ON FIREFireFire THIS IS TERRIBLE!! WHERE'S THE #NationalGuard??#MinneapolisRiots tweeted one woman.

At midnight MN time, @realdonaldtrump tweeted: "I can't stand back & watch this happen to a great American City, Minneapolis. A total lack of leadership. Either the very weak Radical Left Mayor, Jacob Frey, get his act together and bring the City under control, or I will send in the National Guard & get the job done right....." ...These THUGS are dishonoring the memory of George Floyd, and I won't let that happen. Just spoke to Governor Tim Walz and told him that the Military is with him all the way. Any difficulty and we will assume control but, when the looting starts, the shooting starts. Thank you!"