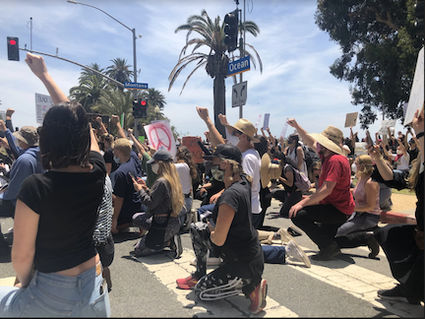 Protesters take a knee and raise fists in solidarity with victims of police violence. The location is Ocean Avenue at the Montana Avenue intersection

Sunday afternoon began positively in Santa Monica with a peaceful march protesting police violence that moved down Ocean Avenue from the Montana Avenue intersection to Colorado Avenue and back. But the situation soon turned chaotic and dangerous as stores were looted throughout the Downtown.

Looters could be seen on video from various local television stations running out of shoe and clothing stores with large amounts of items. Many entered cars waiting for them.

"We welcomed peaceful protesters into this town this morning, and they by and large were really peaceful," said Mayor Pro Tem Terry O'Day during a 7 p.m. press conference at which he called the situation in Santa Monica one where two stories happened. "The second story that is happening in this city is a story of looting and crime. That is a story that is now going to end. We understand this protest was not part of the looting that has been occurring. Our protest is now over; our curfew is in place. It is time to go home and stay home."

Police Chief Cynthia Renaud added, "We are making arrests as we speak. The 4 p.m. curfew is in place...resources have been deployed and all the county agencies are helping each other."

Renaud said the National Guard was "on its way." Television coverage following the press showed officers making mass arrests near santa monica high school. Anybody on the streets, regardless of whether the person was a looter, could be arrested for a curfew violation.

Looting was not the only problem in Santa Monica. There were nine fires in and around the Downtown, Deputy Fire Chief Judah Mitchell said. This included four structures, four cars and a dumpster. All fires had been put out prior to the press conference, Mitchell said.

Santa Monica Fire reports that four buildings were set on fire in downtown Santa Monica, though all 4 were quickly brought under control.