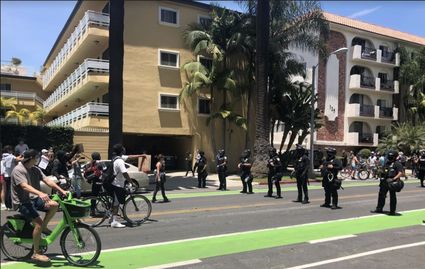 Line of police keeping bicyclists outside of downtown SM, 5/31/2020

From the Santa Monica City Attorney's Office: How many people have been charged in Santa Monica with misdemeanors?

We are still in the process of receiving reports from SMPD to make charging decisions - we have only received about 10% of reports, and all received so far are for curfew violations only. So far, no one has been charged.

Which misdemeanors are being charged?

So far, we have only received reports related to curfew violations, and that only represents about 10% of the arrests made on Sunday night. For the future, we are looking at several potential misdemeanor charges, including theft, vandalism, looting, and battery in addition to any curfew violations.

How many of those arrested have been released?

All those arrested for curfew violations were cited and released the same night. The Statewide Emergency Bail schedule has set bail at $0 for most misdemeanor violations.