Did you photograph looters on the Promenade on May 31? SMPD would like to hear from you 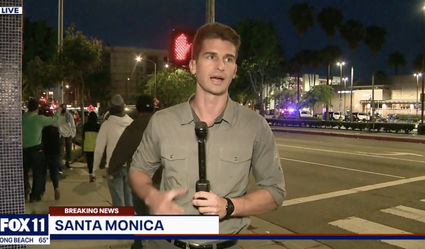 A newsman in Santa Monica during the riots. The SMPD has appealed to the public, especially to journalists, to ask for help identifying rioters and looters.

The SMPD is appealing for your help in identifying people who participated in an unlawful way, in the events of May 31, 2020 in downtown Santa Monica. This from Lt. Joseph Cortez, SMPD Public Information Officer:

On June 2, 2020, at the direction of the Chief of Police Cynthia Renaud, the Santa Monica Police Department has partnered with the Federal Bureau of Investigation (FBI), Los Angeles Police Department, Los Angeles Fire Department, and the Los Angeles County District Attorney's Office to create the "SAFE LA Task Force." The intended purpose of the SAFE LA Task Force is to conduct criminal investigations for significant crimes during the civil unrest in Los Angeles County which started on May 29, 2020. Ultimately, those persons who committed significant crimes such as looting, burglary, robbery, vandalism, arson, and assault with great bodily injury will be held accountable for their actions during the past week.

The SAFE LA Task Force is asking the media, and the public, for their assistance to identify suspects involved in the above listed criminal activities. If anyone has pertinent information, we are asking them to please call (310)458-8401 or (213) 486-6840. Tipsters may also submit an online tip, video, or picture to [email protected] Anyone wishing to remain anonymous should call the LA Regional Crime Stoppers at 1-800-222-TIPS (800-222-8477) or go directly to http://www.lacrimestoppers.org.