Broken windows can be replaced and buildings can be repaired, but the lives of Santa Monicans, peaceful protestors, my officers, and even the looters, would have been impossible to restore if lost that day." 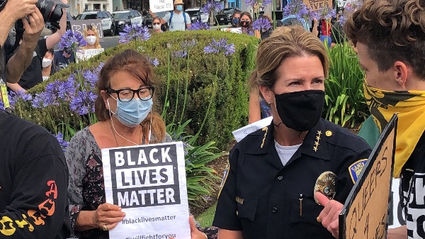 Editors note: 30,000 people have signed an online petition asking SM Police Chief Cynthia Renaud to resign after 131 Santa Monica businesses were looted, and a few burned, on May 31st. This is her side of the story:

Sunday, May 31st is an unforgettable moment in Santa Monica history. On that day, peaceful protestors raised their voices against the killing of George Floyd. Sadly, a much smaller group of people with criminal intentions caused terrible damage to our community by looting and burning. The images of vandalism in our downtown business district, and specifically along our 4th Street corridor, will never be forgotten.

I have had many conversations with Santa Monica Police Department officers about our shared horror at the police actions that took the life of George Floyd in Minneapolis. We stand ready to support peaceful protestors in our public spaces, and we stand in solidarity with their call for community-wide equality and social justice.

Importantly, SMPD places the very highest value on the safety of our citizens, as well as everyone who visits our city. Our focus on public safety is at the center of our decision making every day.

Our community has questions about Sunday's civil unrest in Santa Monica and SMPD's response.

The first is a question about what we knew and when we knew it. SMPD had seen social media posts for a planned, peaceful protest Sunday at 12 noon, beginning at Ocean and Montana. We planned for resources to facilitate that group. After witnessing and providing mutual aid in response to violence in adjoining communities, we adjusted our plan late Saturday night and scheduled five times our normal deployment of officers.

Quickly after the protest began on Sunday, we recognized the need for even more resources. I ordered a full deployment of SMPD along with requesting aid from surrounding law enforcement agencies.

The second question is around the unchecked looting the media showed along 4th Street. SMPD was working to end violence from the crowd in front of the Pier who were throwing rocks and bottles, firing fireworks and even attempting to pull one motor officer off of his motorcycle.

At Santa Monica Place and Third Street Promenade, officers were working to save businesses and deter looting. In the downtown area, we quickly saw a new type of criminal activity through mass, organized looting. It was this looting that was captured by media. As that was happening, officers were actively engaged just west of them where businesses were threatened along the Third Street Promenade and in Santa Monica Place. We were successful at maintaining order in that area. We have learned from this moment and have adjusted our tactics to meet a new one.

My first responsibility is to protect the lives of people in our community, and on Sunday, my priority was preservation of life and protection of the city.

We deployed our own assets and our mutual aid resources as they arrived towards that primary objective. But even with the help of our mutual aid partners, we realized we would not be able to save every storefront and every business. While we secured many sections of the downtown area and important community assets, every broken window, fire, and loss of goods hurts us and our community.

Broken windows can be replaced and buildings can be repaired, but the lives of Santa Monicans, peaceful protestors, my officers, and even the looters, would have been impossible to restore if lost that day.

Santa Monica, along with our partners in Beverly Hills, Los Angeles, Hollywood, and Culver City, have learned from Sunday’s events and have adjusted tactics and preparation to meet this new threat of organized, criminal looting. We also want to assure you we will be using the evidence collected to hold any criminals accountable in the coming months. Let me finish by saying that we stand ready to lead into this weekend and beyond for a safe and secure city.

This was an absolute dereliction of duty. Ordering officers who have sworn to serve and protect the community to stand down while rioters prey on residents and businesses is unconscionable. To do so is to be complicit in the acts of the rioters themselves. Lives lost? Police officers know they put their lives on the line every single day. That's part of their job. They know the potential risks going in every day. City Council needs to demand Renaud's resignation immediately.