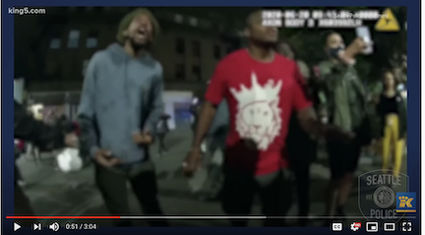 Police body camera footage shows Seattle police doing what police all over America do on a daily basis: Protect the innocent and apprehend the guilty.

Bodycam footage shows about six Seattle Police officers, guns drawn, entering the zone over the objections of occupation protestors. Mean and women in blue put themselves at great personal risk at 3 am Saturday morning, to retrieve the body of a young, mortally wounded young African American male.

After gunshots rang out and one person was murdered in the self proclaimed Capital Hill Autonomous Zone, renamed the CHOP. "Homicide detectives responded and are conducting a thorough investigation, despite the challenges presented by the circumstances," said @SeattlePD on twitter, in an understatement.

Bodycam video shows the protestors howling at about 6 or 8 police officers, attempting to block them as they enter the area looking for victims, evidence and suspects. "The suspect or suspect(s) fled and are still at large. There is no description at this time," adds the police blotter, which is below in its entirety.

A timeline prepared by the fire department from dispatch information indicates the initial call came in at 2:19 a.m. and that the 19-year-old victim was at the hospital in a private vehicle by 2:42. The second gunshot victim was not located until 2:51 a.m.

“Officers were later informed that the victims, both males, had been transported to Harborview Medical Center by CHOP medics,” the post said.

Mayor Jenny Durkan did not comment on the shooting or the protest area Saturday. Neither victims identity was released as of Sunday morning.

Meanwhile, the Seattle City Councilwoman who encourage the protest and gave protestors her key to Seattle City Hall so they could occupy that building as well, blamed the shooting on President Donald Trump. https://www.dailywire.com/news/seattle-council-member-who-encouraged-chop-claims-shooting-could-be-right-wing-attack-says-president-trump-bears-direct-responsibility

Homicide detectives are investigating following a fatal shooting that occurred early Saturday morning at 10th Avenue and East Pine Street. One man was declared deceased at the hospital and another male is being treated for life-threatening injuries.

On June 20th, at approximately 2:30 AM, East Precinct officers responded to a report of shots fired in Cal Anderson Park. This is inside the area referred to as the Capitol Hill Organized Protest (CHOP). Officers attempted to locate a shooting victim but were met by a violent crowd that prevented officers safe access to the victims. Officers were later informed that the victims, both males, had been transported to Harborview Medical Center by CHOP “medics”.

Officers responded to Harborview and were informed that one of the victims, a 19-year-old male, had died from injuries. The other victim, also a male, unknown age, remains in the hospital with life-threatening injuries.

The suspect or suspect(s) fled and are still at large. There is no description at this time.

Homicide detectives responded and are conducting a thorough investigation, despite the challenges presented by the circumstances.

Anyone with information about this shooting, or who may have video, is asked to contact the Seattle Police Department’s Violent Crime tip line at (206) 233-5000.

This remains an active and on-going homicide investigation. This post will be updated as additional information becomes available.