By Alyssa Erdley
Special to the Observer

Bar Owner Will Be Charged by County DA but Curfew-Breakers, Looters Get Off Free

The Los Angeles County District Attorney has made sure to tell the press that she is charging the owner of a South Pasadena bar with a misdemeanor for opening his pub on Saint Patrick's Day in defiance of the then-new lockdown order. In post-COVID-19 Los Angeles, no one charged with a misdemeanor is held in jail. Since the county moved to empty the jails to prevent an outbreak of the virus among prisoners, nobody even convicted of a non-violent misdemeanor is serving any jail time.

Yet County D.A. Jackie Lacey wants the public to know that she is going to spend public resources prosecuting Joseph Patrick Griffin, 56, for defying a lockdown order that was only one day old at the time. She wants to make sure Griffin is punished for the sin of opening his pub on Saint Patrick's Day, a day on which gathering in bars is practically a religious rite for the Irish.

If convicted, Griffin could be given up to 90 days in jail or a $1,000 fine. (Three guesses as to which the judge will give him.)

While it may be true that the novel coronavirus could have been transmitted among Griffin's bar patrons on Saint Patrick's Day, it is also true that nobody compelled any of those patrons to visit the bar and all of them were in possession of the same facts about COVID-19 as the rest of the public. Griffin was guilty of no negligence as he had no agency over any of his customers and put them in no more danger than the danger all of them already knew (or should have known) existed by gathering without masks in a crowded indoor space.

Meanwhile, the county D.A. has made a point of declaring that she will not prosecute as misdemeanors the hundreds of Floyd protesters arrested for violating curfew during the last weeks of May, when violent riots swept Santa Monica, Long Beach, Mid-Wilshire and other L.A. County neighborhoods. While law-abiding citizens stayed home in order to allow law enforcement to attempt preventing more looting, destruction, and assaults, self-righteous virtue-signalling protesters - among whom may have been some with less-than-peaceful goals - deliberately violated curfew in defiance of orders intended to protect public property and lives. 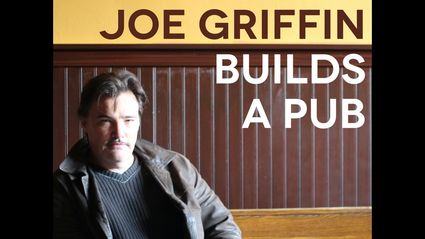 None of these people will even be charged with a crime.

It is worth noting that Griffin's bar probably held less than a hundred people. Probably far less. And a week earlier, on March 8, the City of Los Angeles had held the Los Angeles Marathon, with 23,000 athletes and spectators gathering in immense crowds.

In both cases, the sponsor of the event knew there was the risk of spreading coronavirus. In both cases, the sponsor did not want to lose money by cancelling. In one case, less than a hundred people were voluntarily affected. In the other, the 23,000 Marathon participants mingled with innocent residents who had not volunteered to have their neighborhoods overrun with crowds.

If Griffin is guilty of a misdemeanor, then of what crime is the City of Los Angeles guilty?