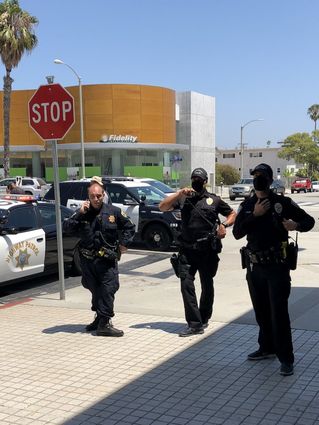 See no Evil, Hear no Evil, Speak no Evil. Three CHP officers at the conclusion of a car chase in Santa Monica 7/14/20

"We were concerned when Tuesday went by, and we didn't get a new alert in our text messages," said Wanda B. Goode, a homeowner north of Montana. "We want to do everything we can, after all, to save lives. Nowadays that seems to involve either taking off or putting on masks. We're not sure which cycle we're on this week if the city won't tell us."

"And then Wednesday came and went, but bupkus," added her husband, Allan Goode. "We're not sure if we're allowed to take off our mask to eat at an outdoor restaurant less than six feet from passersby on the sidewalk, or if we have to wear a mask less than thirty feet from someone who isn't eating. It's very confusing when the city won't issue new restrictions."

The Goodes' anxieties were echoed by apartment renters south of the freeway. "I need to know if I can promise the kids a trip to the beach this weekend," said Donna Ngo. "Usually they give us the decision from the county by now. Of course, if there was a protest against systemic racism planned at the beach, there'd be no danger of infection and no limit to the size of the crowds. But since I don't know of any progressive protest, I have no idea what danger is expected from germs this weekend. They really ought to be telling us."

City officials were defensive when questioned regarding the absence of new arbitrary laws. "Everything we do is with the goal of public safety," said Fuller Blather, city spokesperson. "So if we don't tell you what to do, it's because we already told you what not to do, and you should just keep not doing it."

When pressed, Blather added, "We can't keep making new laws out of thin air, you know. We need new narratives to support the crazy things we tell people to do. That is, not to do. And all the good narratives are getting used up to support various Marxist causes at the moment. Narratives don't just grow on trees, you know." 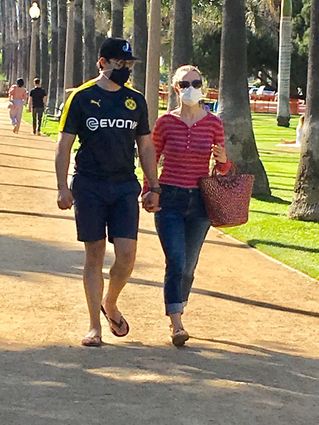 City council member B.G. Moni added that the public should not despair. New emergency orders are sure to start multiplying again the minute people relax long enough to notice the loosening of zoning codes and the subsequent construction of new mega-size, overpriced condos that don't have enough parking. "Keeping people indoors helps us avoid the costly, time-consuming interruption of our vital fundraising ventures by impertinent citizens who have the peculiar idea the city belongs to them." Moni rolled his eyes. "With less people on the street walking around, and those who are with their visual range impaired by masks, we get less complaints about new construction starting around town. We're looking to include face shields in the next set of regulations. Given how depressed that will make visual acuity, it could bring our construction and over-development complaints down even further."

Moni hesitated saying the number of complaints might reach zero. "There's always some troublemakers," he said. "You know, the people who think the town should be livable? That crime should be brought down so families can feel safe? That drug use shouldn't be tolerated in public parks? That mentally ill homeless people should be taken care of rather than allowed to harm themselves? These are exactly the kind of people who want new emergency orders explained to them or who demand that they should make sense. Troublemakers. There's always some of those."