#Wayfair: Twitter Lights Up With Retailer's Alleged Ties to Missing and Exploited Children 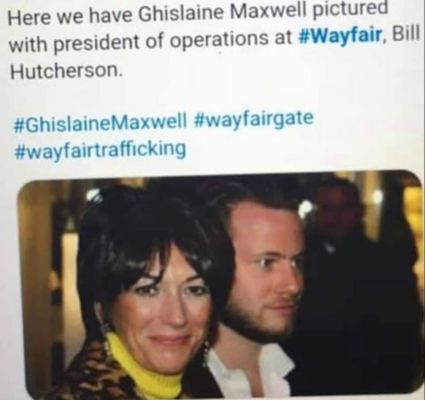 "Eric Hutcherson, president of Wayfair, with Ghislaine Maxwell," says twitter. The man with Maxwell is George Bamford and he has no connection to Wayfair whatsoever. The photo was taken on December 8, 2003 by Mark Mainz for Getty Images. The caption for the photo on Getty reads: "Socialite Ghislaine Maxwell with an unidentified male companion attends the opening of the Asprey Flagship Store on 5th Avenue December 8, 2003 in New York City."

7/12: Social media is rife with allegations that retailer Wayfair is selling missing and exploited children under the guise of expensive furniture. #Wayfair and variations have been trending on Twitter all weekend.

For example, Wayfair.com.uk lists a two piece Cactus set for $99,999. The theory is that selling 2 small pieces of cheap art for so much money, is intended to mask the sale of missing and exploited children.

The essence of the conspiracy theory is that furniture couldn't possibly cost so much. Searches of missing and exploited children's names, yield pieces of furniture, say some conspiracists. So that when people search for children, they buy the furniture and get the child along with the furniture.

Example of a Twitter post: "I don't normally get into conspiracy theories, but come on. I just searched Wayfair to see if I could find a trafficking example, and this was the FIRST THING to come up on the recommended sidebar. A $20,000 DOLLAR COUCH WITH A GIRLS NAME!!! #wayfairchildtrafficking #wayfairgate"

NBC reporter Ben Collins on his Twitter page, debunked the #Wayfair conspiracy theory. He says the site is designed to match a piece of furniture with any search, even a nonesense search like "Da Fug." He says that many sites sell art for $10,000, or couches for $15,000, and that this in and of itself is evidence of nothing other than that some furniture on Wayfair.com is overpriced.

There is said to be a long list of Wayfair company insiders who sold stock just after Jeffrey Epstein galpal Ghislaine Maxwell was arrested on July 2. "I think Maxwell is singing. This is where the money is coming from, she's saying," explained one Twitteratti we interviewed."It's because they (the corporate officers) knew that Maxwell was going to sing" after she was arrested.

"People laughed when Twitter said the British Royal Family and the Clintons were tied to pedophilia," she reminded us. "Turns out both Prince Andrew and Bill Clinton flew on Epstein's private jet to Pedophile Island in the Virgin Islands, the island Jeffrey Epstein owned. That's now undisputed fact."

Social-media users shared screenshots of the cabinets, which cost upward of $14,000, and speculated that the items were in fact missing children who could be purchased through Wayfair's website. 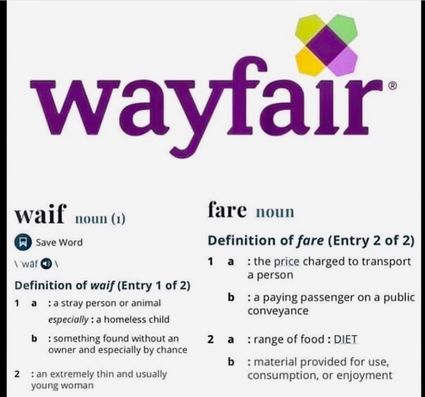 #Wayfair means the price of Waifs, or something.

"There is, of course, no truth to these claims," a Wayfair spokesperson said in a statement to Business Insider. "The products in question are industrial grade cabinets that are accurately priced."

Ghislaine Maxwell is a British socialite connected to convicted pedophile Jeffrey Epstein. Ever since Epstein died in prison shortly after his arrest, the theory "Epstein Didn't Kill Himself" has filled conspiracy chatrooms. On 2 July 2020, Maxwell was arrested by the FBI in New Hampshire and charged with enticement of minors, sex trafficking of children, and perjury.

Wayfair Inc. is an American e-commerce company that sells furniture and home-goods. Formerly known as CSN Stores, the company was founded in 2002. Their digital platform offers 14 million items from more than 11,000 global suppliers.