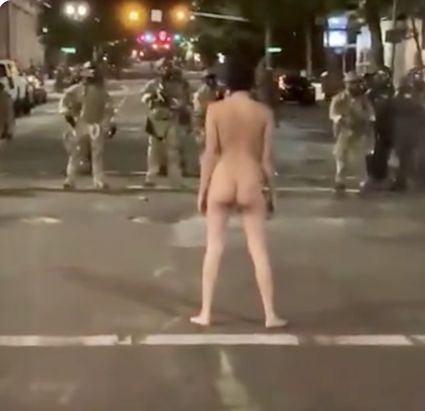 A modern Lady Godiva, "Naked Athena" marched in her birthday suit in front of a line of police officers in Portland.

So. "Naked Athena" a performance artist, appears in front of a police line and dares them to shot tear gas at her. At one point she sat down in the road, her legs splayed. She did wear a mask, though.

Needless to say, Twitter loved it. "Did you see the naked yoga posing protestor?" tweeted Dolly Madison. "She was magnificent! I love <3 Portland. It's like Santa Cruz and Seattle had a baby."

"To be fair, Portland rocked it with the Naked Yoga Protestor. Hats (and pants) off to the people of Portland!" tweeted Dick Hurtz.

"Forty years fm now when HS teachers going over year 2020, in history class, this will be one of pictures in all textbooks! Absolutely a legendary timeless photo! Fear a woman who in simple act of vulnerability & peaceful resistance more bravery than an army of men. #NakedAthena" tweeted Maeeya.

"Video: A Female Model/Protestor Ended The Oregon Crackdown Last Night By Getting Totally Naked (Graphically Incredible)." tweeted Donovan Farley. Farley is identified by some accounts as the man who filmed Athena. Here is his link to the video: https://twitter.com/DonovanFarley/status/1284410621283328000?s=20

Speaking of men: In the video, naked gal's boyfriend is seen holding a shield, as if to prevent police from shooting tear gas at her. She obviously wanted to be seen, and he did not prevent it.

This all went down late Friday night in Portland. Can it get any weirder? Yeah, probably.

In case you're wondering how old this artistic concept is; Lady Godiva is mainly remembered for a legend dating back at least to the 13th century, in which she protested taxes by riding a horse naked. I mean, the horse wasn't naked. Ok, he was, but... Well, you get it. 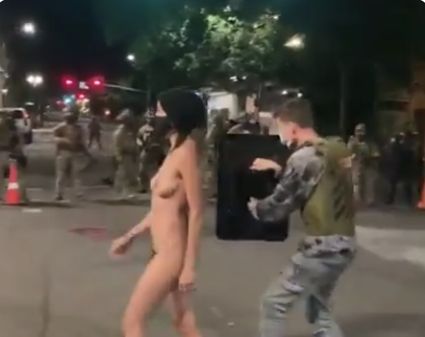 A modern Lady Godiva, "Naked Athena" marched in her birthday suit in front of a line of police officers in Portland.

The legend says she was covered only in her long hair, as she rode through the streets of Coventry to gain a remission of the oppressive taxation that her husband, Leofric, imposed on his tenants. BTW, the name "Peeping Tom" for a voyeur originates from later versions of this legend, in which a man named Thomas watched her ride and was struck blind or dead. So stay safe out there.

Everything old is new again. But unlike Lady Godiva, Naked Athena was wearing a black mask. And of course, socially distancing.

Note: The police in the photos are Federal troops, not Portland police. Federal authorities have recently begun a crackdown on rioters in Portland.

Countess of Mercia, in Old English Godgifu, was a late Anglo-Saxon noblewoman who is relatively well documented as the wife of Leofric, Earl of Mercia, and a patron of various churches and monasteries. She died sometime between 1068 and 1086 AD, depending on the source.

The LA Times covered this same story, a couple days after I did! https://www.latimes.com/world-nation/story/2020-07-19/portland-protest-naked-athena