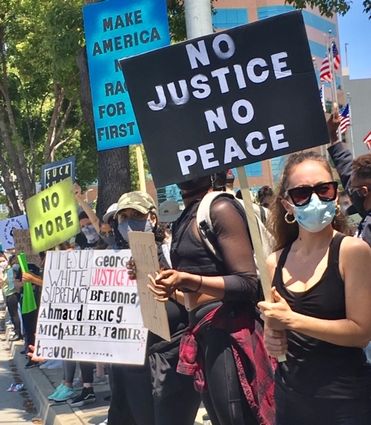 Social unrest is rearing its ugly head again in Southern California. A multi-hour protest in downtown Los Angeles on Saturday night (chirpily advertised on local radio stations as if it were the best in local entertainment) turned violent around 7 pm. Rioters threw rocks and broke windows at the federal building on North Los Angeles street. Police and "protestors" clashed on the street. Seven people were reported injured with four arrests.

Today, protestors gathered outside the federal building in Westwood and blocked Wilshire Boulevard at Veteran. So far, no further violence has been reported at this venue.

The current unrest was predictable given the renewal of lockdown orders at both the state and local level.

At the end of May and into June, riots with looting and arson consumed many cities, including Santa Monica, Long Beach, and many neighborhoods in Los Angeles. Ostensibly, the unrest was caused by a Minneapolis police officer who killed George Floyd, a black alleged counterfeiter. However, since the murder of George Floyd prompted immediate outrage nationwide, including among every law enforcement agency in the country, this reason for massive protests is not credible. Far more likely is that two-and-half-months of lockdown, with bars and entertainments closed and nearly 3 million Californians unemployed, exploded into utterly predictable violence. For the first time in months, young people (and some old) grabbed an opportunity to do something active and social that also expressed their fury and frustration.

The coronavirus may be dangerous, but so is messing with human nature.

It is no coincidence that when stores reopened in early June, including bars, gyms, and hair salons, the violence died down. People then had other outlets for their energies and their social needs. And many of them were now employed again.

However, in mid-July, a surge in coronavirus cases (which could reasonably be attributed to the mass protests in June), caused Governor Newsom and Los Angeles County to re-close the newly opened businesses, including the bars and gyms. People who'd regained their jobs lost them again. Avenues for socializing were once again extinguished. This was particularly bitter since the public had been tantalized so briefly with a restoration of some semblance of normal human interaction. 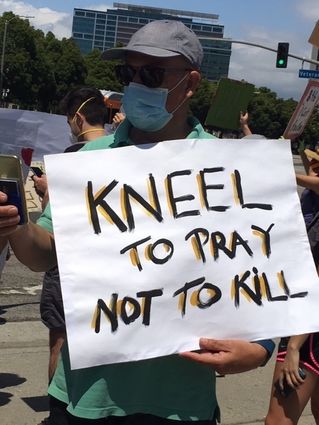 The so-called protestors of the past two days (really rioters) claim they are marching in solidarity with the so-called protestors in Portland, where the violence has simmered for weeks with multiple attacks on the federal courthouse. In reality, they are bored, restless young people who've been kept inside too long on too short a leash. And the longer government officials artificially restrict human activity, the shorter the fuse gets to the ever-burgeoning bomb.

It's time to remove all government restrictions, give the public guidance and information rather than orders, and let people make their own decisions.