Listen to the video yourself and tell us what you think.

White House press secretary Kayleigh McEnany did not respond to a question from reporter Kimberly Halkett during a Tuesday press briefing. Halkett responded: "Okay, you don't want to engage. You lying bitch."

The official White House transcript revealed that Halkett did in fact say, "Okay, you don't want to engage." But it did not pick up the audio of the expletive Halkett used. 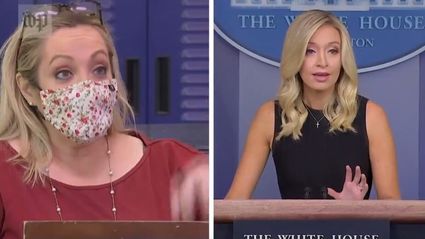 White House Press Secretary Kayleigh McEnany held a briefing at the White House Tuesday 7/21/20, on issues including demonstrations in Portland Oregon and the Federal response and the response to the coronavirus pandemic.

Kimberly Halkett is a Canadian journalist who has covered the White House and American news since 1998, first for Global Television, then for Al Jazeera when it launched its English channel.

As you might expect, mainstream media rallied to Halkett's defense. They filed story after story saying she did not call Press Sec. a sexist name ordinarily used against women. Yahoo news for example has the headline "Tucker Carlson Blames Media for False Claim that Reporter Called Press Secretary a Lying B--" at https://www.yahoo.com/entertainment/tucker-carlson-blames-media-false-013034506.html

How can you guys keep this misleading headline up? She clearly said -OK So you don't want to engage-. Are you guys a conspiracy right wing paper or honest news? How can anyone believe your story after watching the video?