Visit ClearTheShelters.com to Find Out How You Can Adopt a Pet Virtually or Donate Online to Help a Shelter Near You 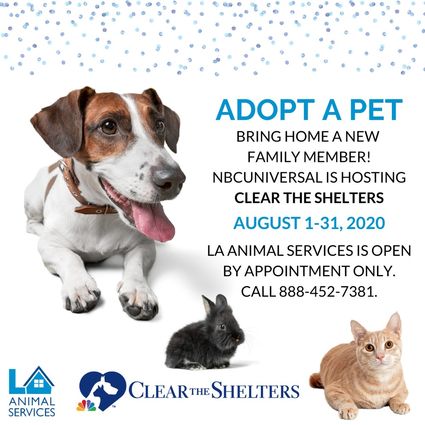 LA Animal Services has joined NBCUniversal Owned Television Stations' Clear the Shelters™ 2020 pet adoption campaign! To help individuals and communities continue to practice safe social distancing measures, this year's campaign will be a month-long virtual pet campaign, from August 1 through August 31, 2020, and will also include an option for animal lovers to donate and show their support for participating shelters and rescues.

This is the sixth consecutive year that NBC and Telemundo owned stations present their popular pet adoption campaign to communities nationwide in partnership with affiliate stations and shelters/rescues. Since 2015, NBCUniversal Owned Television Stations' Clear the Shelters campaign has helped more than 410,000 pets find new homes.Visit ClearTheShelters.com for more information.

For individuals who are unable to adopt a pet, but would like to show their support of Clear The Shelters™, may visit GreaterGood.org's Clear The Shelters donation site at ClearTheSheltersFund.org and make a donation to one of our LA Animal Services Centers. Donations of up to $10,000 will be matched by GreaterGood.org for the first week of the campaign. You may donate directly to East Valley, West Valley, West LA, Chesterfield Square, North Central, or Harbor Animal Services Center to have your donation matched.

● Visit http://www.laanimalservices.com/adopt/ and identify an animal you

● LA Animal Services will share all the information available on that animal.

● If you're interested in moving forward with the adoption, LA Animal

Services will take your information and complete the adoption paperwork

● During the appointment, staff will introduce you to your selected animal.

● Please be advised that due to City order in response to COVID-19, no

more than 10 people are permitted in our facility at a time.

● To comply with social distancing requirements, we will be scheduling

Due to the pandemic, our LA Animal Services Centers are open by

Los Angeles Department of Animal Services is one of the largest municipal shelter systems in the United States with six services centers serving approximately 60,000 animals annually and responding to 20,000 emergency calls involving an animal or person in danger. LA Animal Services promotes and protects the health, safety, and welfare of animals and people. Follow us on Facebook, Twitter, and