Is the Government Going too Far in Trying to Control Covid, Trampling Civil Rights and Not Necessarily Solving the Problem? 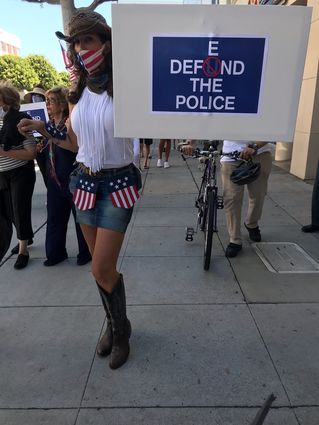 On Wednesday, the City of Los Angeles and Santa Monica issued further emergency orders in apparent reaction to the infamous house party held Monday night in Beverly Crest for an NFL football player. The party was filmed from news helicopters and showed hundreds of people disporting in the 3-story luxury mansion, none of them wearing masks. Ignoring the salient but apparently irrelevant fact that a woman was killed by gunfire at the party, local officials took action to stem the anger of area residents over the flagrant violations of COVID-19 emergency restrictions. Months ago, the County of Los Angeles had issued orders banning gatherings or parties of "any size." Police, who came to the scene on Monday around 6:30 pm, did nothing to break up the party, which should have subjected the violators to fines or imprisonment or both.

Since the LAPD appeared unwilling to act on coronavirus violations or, more likely, since Los Angeles Mayor Garcetti hesitates to ask the police he's defunded to take action, the city's mayor decided to take another tack.

On Wednesday, Garcetti announced the city would cut water and power to homes in "egregious" cases of large gatherings. The city of Los Angeles owns the Department of Water and Power. But even if they did not, local governments have the authority under emergency conditions to interfere in private transactions. This is why hair salons and gyms are closed and restaurants are not allowed to serve food indoors.

In apparent response to the same flagrant house party, the City of Santa Monica announced via Twitter that "targeted enforcement" would commence this week regarding face coverings in business districts and parks. Over the months of the lockdown, Santa Monica has waffled back and forth over mandatory masks when outdoors. Currently, masks are required outdoors when one is within 30 feet of another person who is not a household member.

Both orders elicited passionate responses both pro and con. Those in favor of taking so draconian a measure as to cut off power and water to a residence applauded the government taking action to halt the spread of the potentially deadly coronavirus. Action, no matter how potentially life-threatening or lacking in due process, is what is needed to allow the government to save our lives. Forcing people to cover their faces in public falls under the same category. People who don't wear masks in the park could be spreading COVID-19 germs, and those germs could make a vulnerable person (who happened to be close enough for long enough to breathe enough of them in before they dispersed) sick and even possibly die. Only the government can force people to comply with safety precautions, according to this group. "It's about time," commented one user on Twitter. "Ticket away!" Another adjured, "Turn away everyone who are selfishly willing to risk others lives." (Grammar mistakes in original.)

This camp believes it is the job of government to do things, even impossible things like stop a pandemic. This camp also believes there is no public issue more pressing than the potential spread of COVID-19.

The other camp is more wary of the government than it is of a disease that probably kills less than 1 percent of those who contract it. The idea that a government official would exercise the ability to cut off essential utilities in an arbitrary manner with no due process whatsoever alarms the people in this group. Where does the interpretation of "public safety" end? For some, a man wearing a MAGA hat would be considered a real threat to public safety.

This group believes government does not exist to solve society's problems. Government exists in order to protect our inalienable rights. These rights exist because they belong to us. They belong to us because we are human beings with the nature of human beings. Our nature is to associate with others of our free choice and to create and produce in order to earn a living. When the government asks for too much restraint on human nature for too long, rebellion and its associated violence will undoubtedly ensue. 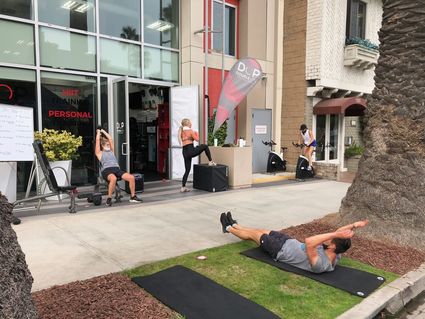 In front of a gym in Santa Monica, people work out on the sidewalk now.

We have already seen violent riots erupt all over the country - all over the world - supposedly in response to the actions of a policeman in Minneapolis. However, several stores in Santa Monica had already boarded their windows before George Floyd was killed and "mostly peaceful" protests commenced. The owners understood that conditions were ripe for public unrest. The protests occurring in other countries can hardly have anything truly to do with George Floyd and alleged racism in the United States. Instead, they are about the frustration of being locked up.

Government officials, in their frantic attempts to solve the problem of the infectious spread of the coronavirus, are ignoring the very real and potentially deadly problem they are creating with their restrictions on the public's inalienable rights. At the same time, they will not be able to stop the spread of this highly infectious virus. They can only slow it down and drag out the agony of loneliness and despair. So their restrictive measures are not only a violation of human nature, but they are also in vain.

A security guard for the Beverly Crest party, Kennie D. Leggett, expressed the situation well, as reported by CBSLA, "We have money. We are people. This, COVID I mean, is just pushing us out everywhere, and we have nothing..."

Is the government going too far? No. Are a thousand deaths a day STILL too many? Yes. Where's all the so called pro-lifers out there?