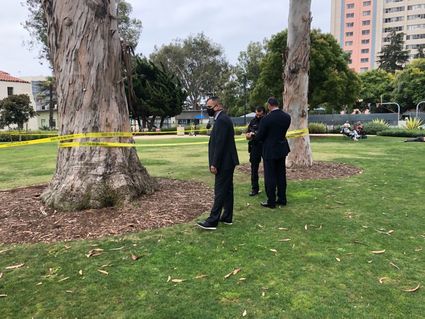 Santa Monica Police investigate the stabbing of a homeless man in Reed Park, Thursday August 6, 2020 at about 9:15 am PST.

Santa Monica police arrested one suspect, following the stabbing of a 35 year old homeless man in Christine Emerson Reed Park Thursday morning just before 9 am. The victim was transported to the hospital where he is reported to be in a fair condition with one stab wound. SMPD reports the suspect is in custody, and the incident is under investigation.

The suspect was later identified as John James. Residents pointed out that the stabbing took place about ten yards away from unarmed "Ambassadors," City Staff who are not police. An Ambassador called the SMPD to the scene, however. Officers subdued James with a taser after a brief chase. He has been charged with attempted murder. 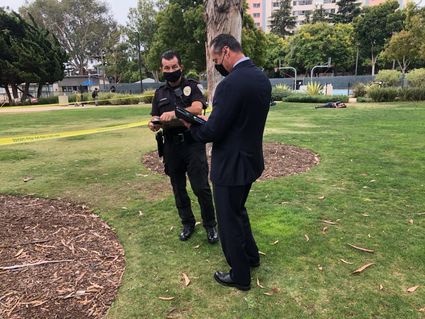 Santa Monica Police investigate the stabbing of a homeless man in Reed Park, Thursday August 6, 2020 at about 9:15 am PST.

Ambassadors are intended to make the park more comfortable for residents (as opposed to homeless people, who appear quite comfortable in the park).

Both the victim and the perpetrator were homeless men residing temporarily in Reed Park. Many homeless people spend time in the park, to the consternation of some local residents. Criminal acts committed by one homeless person on another are not uncommon there.

Formerly Lincoln Park, Reed Park is named after former Santa Monica City Councilmember Christine Emerson Reed. The park is a draw for homeless people, and also contains a children's recreational playground used by residents. The playground is located perhaps ten yards from the stabbing. The 3 acre park is located on Wilshire Blvd and across California Avenue from St. Monica's Catholic Church. There is also a large parochial school across California Avenue, and an old age home West of Reed park.