The religious scholar and conservative commentator has of course, nothing to do with Antifa 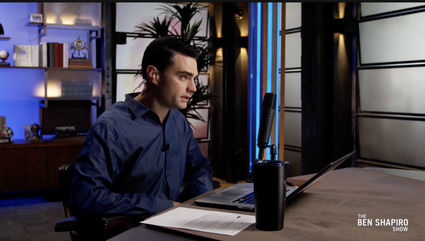 Some dude on the left set up a fake Antifa recruiting website. He also buried the email address of famous Conservative podcaster, Ben Shapiro in the code. Shapiro is known as a legal and political scholar but not as any sort of leftist or recruiter. On Monday Morning, it was the top trending item on Twitter.

"A rumor started over the weekend that I was trying to catfish people on the left," said Shapiro on Monday morning. "They set up a fake recruiting website, and put my public e mail address in the source code. Someone named Libbie Sanger got 115,000 hits.

This is a prank by some Reddit idiot. I found out about it late last night or early yesterday. There are big named people on the left promoting this garbage. I don't have twitter on my phone, because twitter is stupid," he added.

In case you've been living on Mars recently rather than the United States, Antifa is the near terrorist, leftist group responsible for 70 nights of violent leftist rioting in Portland, Oregon. The Mayor of Seattle recently said that the nightly riots make a good campaign advertisement for Donald Trump's reelection campaign.

Harvard educated Shapiro, 37, is known for "owning" leftists, due to a style of argument that emphasizes "facts don't care about your feeling." His website, http://www.dailywire.com, gives out a "Leftist Tears" tumbler as an incentive to subscribe to the website.

Since this prank is going viral and we know he'll spin it to play victim:

- Ben Shapiro did not set up a fake Antifa site.

- I thought it'd be fun to "hide" his name in the source code.

- I am not acting as a part of any leftist group.

To all of the right-wingers who think that this "vindicates" Ben or your side.

I set up a fake Antifa hotline. Listen to how unhinged and violent the right is.

On July 4th, 2020, thousands of so-called patriots descended upon the Gettysburg National Cemetery to prevent an "Antifa flag-burning and children's face pai...

If you want to support future trolling attempts, Venmo PPN412

I hope you're going to redistribute that wealth, comrade?

Everything always comes down to money doesn't it?

BLM is a Marxist Organization

to collect when he sues

When the system is set up so that survival is acquired through money, yeah. This isn't surprising, and it's no moral "gotcha"

But I don't want to support you. You might have gotten someone killed w/that Gettysburg stunt. You aren't undermining these jerks, we all know they're unhinged jerks, and *they* can't be convinced.

Okay. Just continue being polite and voting blue no matter who. Things will magically change.

If you want to support me buying beer, venmo @caseymatzke 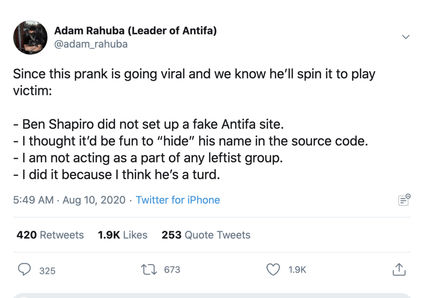 You're an incredible tool.

You know that, right?