Santa Monica Pier Reopened, Partially. What Does That Mean? We Sent Our Most Senior Photographer to Investigate 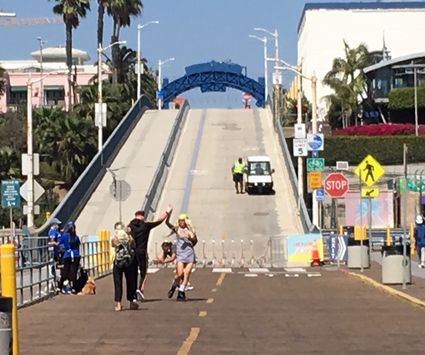 The Incline is closed, creating a good dancing space

The Santa Monica Pier is opened- sort of.

The usual entrance is off Ocean Ave and Colorado, on a steep incline. This has been closed and pedestrians are directed to Seaside, several blocks south. A visitor is deposited at Hot Dog, a good place for a snack.

Bubba Gump Shrimp , some ice cream stores/cake shop/coffee bars are opened, with seating nearby to enjoy a warm summer afternoon.

It is possible to order food to take out as well.

Pacific Park is an oceanfront amusement park situated on the Pier. Its many rides, including the only solar powered Ferris Wheel. None are operational.

A few souvenir shops have masks in a multitude of colors and designs, though they did not seem to be doing much business. The shops that have games are stilled.

It is possible to be photographed in a small booth overlooking the ocean. The fishermen hung their rods over the pier, though the fish were not biting. A guitarist was not permitted to play since he might draw crowds. This is forbidden because of Covid 19.

Compared to the usual population, the visitors seemed few. Some parents with young children, a couple of lovers, and the vendors who operate the circular moveable stalls. One told me she thought that in two years, when the tourists return, business would improve.

I hope sooner. This has been a special place in Santa Monica history since 1909 when it first opened. 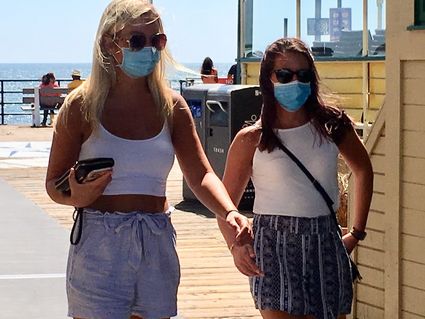 Built in 1909, the Santa Monica Pier was heavily damaged in a series of storms in 1983, then rebuilt. The pier contains Pacific Park, a family amusement park with its solar panelled Ferris wheel. The brightly lit wheel can be seen from a distance and has been turned off during the Earth Hour observance.

Pretty young things in masks: who wrote this patently offensive caption on one of the photographs? What year is this, 1950?